Rebels may have dodged a bullet

UNLV got their guy

UNLV football was going for some sort of splash and but heavy on experience when it came to hiring its new head coach. Barry Odom fits the latter more than the former, as did their less-than-a-month offensive coordinator Bobby Petrino.

Petrino left for the same position with Texas A&M but his move might have been a giant plus for UNLV football. Petrino was never a long-term fit (just google his track record).

The Rebels made a brilliant move that this writer has been in fan of for years to bring back into the Mountain West and they did it.

SOURCE: Texas passing game coordinator Brennan Marion is expected to become the new offensive coordinator at UNLV. He’s been a prolific OC with his “Go-Go” offenses previously at William & Mary and at Howard.

His offense is new and innovative which is what Warrior fans saw in Hawaii win running back/do-it-all Calvin Turner, Jr., was used in both the ground and passing game.

Marion was also the wide receivers coach during Pitt’s magical 2021 season that saw them go to the Peach Bowl and helped wide receiver Jordan Addison win the Biletnikoff award.

You should know Brennan Marion and his unique GoGo offense. The smartest coaches in football already do.

His offense has helped a lot of teams like the aforementioned Howard upset, Pitt actually having an offense despite how upset it made head coach Patt Narduzi.

A good amount of Texas fans are not sure why Marion would take this type of job, despite being a chance to call plays for the first time since 2019 when he was the offensive coordinator at Wiliams & Mary.

Marion possibly had the itch to call plays and moving up the ladder is not always easy. It can be hard to turn down a coordinator or head coaching job when you haven’t been one in your career at the FBS level.

He maybe could have stayed a bit longer and see what the Arch Manning-era in Austin would be like. Maybe it’d be great and Marion would then get a year in the SEC and find a bigger job than the UNLV offensive coordinator job?

There are no guarantees in life, plus coaches can be stubborn to change. So, Marion bringing in an offense that has never really been run at a Power 5 school in a couple of years might be hard for some coaches or athletic directors.

Marion will get to show his work and proof of concept on the field at an FBS team and being one of the cogs to turn UNLV into a winning program and going to bowl games will lead to bigger and better opportunities down the road. 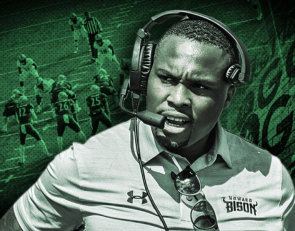