Insert your own Petrino joke here…

Don’t be shocked by this

Kids, go read a book, preferably a history one because it always comes full circle with events recycling and repeating themselves. Also, believe people when they show you who they are by their words and actions.

So… you might wonder how this relates to sports. Well, that is because Bobby Petrino who was hired by UNLV to be its new offensive coordinator under Barry Odom has left to take the same position with Texas A&M.

Petrino was named the OC for the Rebels on Dec. 15 and three weeks later he is off to the SEC.

Don’t be shocked by this at all. In a recent podcast, we did (sorry, I don’t have the time stamp but it’s before the bowl preview part) it was mentioned as a joke in passing that Odom needs to be careful of what he hired because Petrino is always looking for the next best job.

It was felt that if he stuck around for a few years he could do some good and get the Rebels going in the right direction. Then he might get promoted if Odom was snagged up or take a more high-profile job.

Well… he did the latter without even possibly stepping in the town of Las Vegas. The word is he had been out recruiting.

Happened so fast it could give you whiplash. pic.twitter.com/2TP3SBF5ag

Petrino is who he says he is. Just google him and sit back with some fun. He quit the Atlanta Falcons after 13 games to be the Arkansas coach.

Petrino also had off-the-field issues as seen in the tweet above where he got into a motorcycle accident where he first tried to cover up what really happened because he was having an affair with the Razorbacks program. He got a second go around with Louisville but that did not go well either.

Texas Longhorn fans had a field day with this odd hire by Jimbo Fisher and the Aggies. With most projecting it to be a massive disappointment of a hire.

Who knows, maybe UNLV dodged a bullet and saved any disappointment or embarrassment for what Petrino could do while living so close to the Las Vegas strip.

Barry Odom must now look for his second offensive coordinator in under a month. Hopefully, the next coach will at least want to coach spring football. 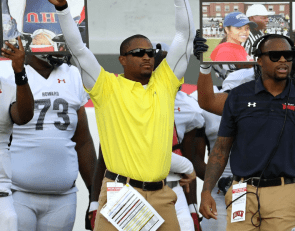