Can the Falcons really run the table this season?

Kickoff to the 2022 College Football season continues to appear less and less distant in the horizon. For the Air Force Falcons, there has been quite a bit activity after a lull in the action following spring camp, which concluded nearly five months ago.

If you haven’t been following, a number of Falcons have been named to various prestigious pre-season awards and All-Conference nominee watch lists. This coincided nicely with the recent completion of the Mountain West’s Media Days. Prior to either of those announcements was the release of the Air Force football schedule for the 2022 season.

Pulse check time. We are getting close to football season. If you are a fan of the United States Air Force Academy, those ‘BpM’ should officially be elevated, because this could be a special season in Colorado Springs.

Don’t believe me? What about a credible college football insider like Brett McMurphy with Action Network HQ? The Falcons look so poised to dominate, McMurphy guarantees that Air Force will win every game on the schedule.

Six schools projected to be favored in every regular season game:

Ok, enough with the hyperbole, maybe there was no promise of an undefeated season decreed, but the Falcons were in some pretty good company for an interesting take. In the coming season, Air Force will be one of six teams to be favored in every game this year. Even for the USAFA optimist, that’s a lofty task, running the table with the given schedule.

I would submit to you, there is not a game on the schedule the Falcon’s could not win, but that doesn’t indicate they should. The college football season is a grind for every team, but that is especially true for the Military Academies who have a lot more to deal with than the rest of the college landscape. If your not familiar with some of the limitations that only Cadets face, well beyond the obvious of combat training, do yourself a favor and explore the topic. It’s as interesting as it is humbling.

There are definitely more formidable matchups on this years schedule, than games of lesser resistance. While being favored against teams like Boise State, Colorado (Boulder) and Utah State may all seem a little surprising; The Falcons have had some level of success recently against them. With a very experienced team, coming off of a double digit win campaign, it’s not irrational to compel Air Force as favored.

There are a few games that seem a bit more of a stretch to favor the Falcons if you really dig into the details. There is no team with a bigger gripe for being an underdog on this schedule than San Diego State. The Aztecs are currently riding a nine game win streak against Air Force, dating back to 2010, with their most recent victory coming last year.

To put their recent dominance into context; Prior to this recent win streak spanning a decade, San Diego State had won just nine of their first 28 against the Falcons. This has been a true turning of the page in this Conference matchup. If the Falcons want to put an end to this losing streak, they are going have to do so under trying circumstances. They will face the Aztecs in their final regular season game of the year.

Air Force regularly is digging deep into their depth chart by seasons end. The grueling season has mercy on no-one, but that is especially true for the undersized, over exerted and absent rest Military Academies.

Speaking of Military Teams, let’s talk about Army. Specifically, why being favored over West Point’s Football team is questionable. In 2022, like most years, Air Force will have a roster appearing more experienced, talented and deeper than Jeff Monken’s crew from New York. Somehow, that formula hasn’t yielded wins over Army four of the last five seasons though.

For many, it’s not surprising that Air Force is favored in a neutral site game against Army, based on their respective 2022 team’s heading into the season. However, having a more talented and complete roster, top to bottom (which Air Force currently has) does not secure anything against their bitter rivals.

The whole notion that Air Force is favored in most games, much less the entirety of their schedule is quite a dichotomy. The Falcons won’t play a team which by present day recruiting metrics, they are “better” than. Even so, to be favored in some games may still be reasonable. But for the entirety of a schedule, one with as many talented opponents as 2022 fashions? That is a testament to what Troy Calhoun, his staff and players have been able to accomplish.

Air Force may not go undefeated this year. But there isn’t a team on their schedule that the Falcons aren’t capable of hanging an L on. And I promise you, not one of those teams will be looking past the Falcons either. 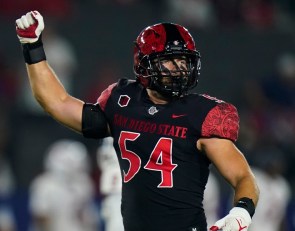