Tulsa has often been a thorn in the side of other more high-profile football programs. Could 2022 offer more of the same?

After opening 2022 on the road against Illinois, the Wyoming Cowboys will open their home slate this fall against the Tulsa Golden Hurricane.

While they aren’t anyone’s idea of a conference championship contender headed into the season, Tulsa has proven it can cause plenty of headaches. They developed first-round NFL Draft picks in each of the last two years and threw serious scares into two different New Year’s Six bowl teams in 2021, meaning that this isn’t a game through which the Pokes should sleepwalk.

Head Coach: Phillip Montgomery (eighth year at Tulsa, 38-46 overall). Winning consistently at Tulsa isn’t the easiest task in the world, so it’s to Montgomery’s credit that he’s coaxed back-to-back winning seasons out of the program for the first time since stringing together three straight from 2010 to 2012.

Last year, in particular, they had a habit of playing things on the razor’s edge and finished with a 5-4 record in games decided by eight or fewer points. That included close losses to UC Davis and Navy, as well as Oklahoma State and Cincinnati, providing a level of unpredictability of which Wyoming will certainly be aware.

Goodlow’s 2021 numbers don’t leap off the stat sheet (28 tackles, six sacks, seven tackles for loss), but Pro Football Focus’s grading system suggests he was the best edge defender in the AAC last year, topping all qualifying players at 87.7. The 6-foot-4, 274-pound Del City, Oklahoma native is exactly the kind of rangy athlete who could give Wyoming’s retooled offense fits if they can’t stop him.

TUL DL Anthony Goodlow is a powerful 5T who stands up his man on the edge to stop the run. He also holds up vs. doubles and envelopes RBs inside while having enough quickness to swim past OG to harass QBs. Here he wins outside to sack Ridder. #SnapScout23 pic.twitter.com/aa3FUdVJv1

In 2021, Davis was as busy as anyone in the AAC when it came to batting down passes, breaking up a career-best ten in his first full season as a starter. Interestingly, he was one of just 18 FBS defenders with double-digit pass breakups but zero interceptions, though that ability to play close to the ball will almost certainly pay more immediate dividends this fall.

It might take a committee to replace the production of last year’s leading rusher, Shamari Brooks, but Prince could be the tip of that proverbial spear after running for 524 yards and five touchdowns on 100 carries. He also flashed a tantalizing bit of big-play ability in that smallish workload, too, with 14 runs of at least ten yards.

Like Prince, Santana could also be in line for a bump in overall production as the Golden Hurricane restock their stable of pass catchers this fall. As it is, he led all returners in 2021 with 50 receptions for 674 yards and three touchdowns, so it’s likely he’ll be a focal point of the Tulsa offense one way or another.

Brin’s first year as QB1 was definitely an adventure. He completed 59.4% of his 411 pass attempts for 3,254 yards and 18 touchdowns, but he also led the country with 16 interceptions and threw multiple picks in six different games. Somehow, Tulsa won three of those contests, anyway, but cutting down on the mistakes in year two is probably a top priority for the coaching staff.

No matter whether you prefer traditional metrics or advanced ones, the Tulsa offense was… just okay last year. They finished fifth in the AAC by averaging 5.99 yards per play and were 75th among all FBS teams with 2.11 points per drive and 62nd in earning 48% of available yards per drive on average. Turnovers were a major factor since the Golden Hurricane had 24 giveaways, the second-most in their conference.

Enough production returns, however, to make you think they could take a step forward. Brin and Prince will be joined in the backfield by Anthony Watkins (88 carries, 634 yards, four touchdowns), Steven Anderson and others, while Santana and Keylon Stokes, who missed most of 2021 with injury but led the team in catches for three straight seasons before that, will shoulder most of the load in the passing game.

Replacing Tyler Smith on the offensive line will be a challenge, but both guards, Bryce Bray and Gerard Wheeler, return and the team utilized the transfer portal to bring in reinforcements like Brody Wisecarver (Illinois) and Darrell Simpson (Oklahoma).

Tulsa’s defense got pushed by some of the better offenses it faced last year, but on the whole it was pretty solid, finishing fifth in the AAC in yards per play allowed and, among all FBS teams, 39th and 41st by points per drive and available yards percentage allowed, respectively. What they’ve generally lacked in obvious high-end talent, they’ve usually made up for with a good track record of development.

Can they be as disruptive as they were last year, though, when they had a 20.9% stuff rate and a 62.9% power success rate? That remains to be seen since Goodlow will need reinforcements after Jaxon Player transferred to Baylor and Cullen Wick moved on to the pro ranks. The transfer portal could pay dividends here, too, after the program brought in nose guard Jayden Simon (Colorado) and defensive tackle Izuchukwu King Ani (Mississippi State).

The good news is that things are more stable further from the line of scrimmage thanks to impact players like Davis and linebacker Justin Wright (82 tackles, 5.5 tackles for loss, 3.5 sacks). They also get a couple of potential stars back from injuries which derailed them in 2021, safety Kendarin Ray and linebacker Jon-Michael Terry.

This game will be an excellent test for the revamped Cowboys as Tulsa projects to be competent on both sides of the ball in 2022, especially if they can eliminate killer mistakes. Expect a close game where the difference lies in the game’s strongest unit, which is likely to be the home team’s defense. 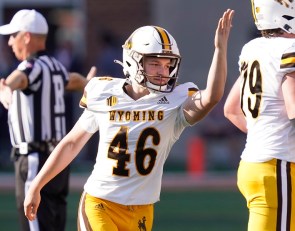