The Sickos Committee gets in the watch list game and San Jose State’s new quarterback is a player who could be in the mix as the country’s most rippin’est player.

If you’re a participant in what is loosely known as College Football Twitter, you’re probably already familiar with the Sickos Committee, an account dedicated to celebrating the game’s strangeness and championing what makes it unique. In that spirit, they jumped into watch list season with both feet today and announced the DETMER watch list.

What is DETMER? You can find a detailed explanation right here, but in a nutshell it is an acronym which stands for “Downfield Eventful Throwing Metric Encouraging Rippin’ It”, which accounts for nothing more than passing yards, touchdowns, and interceptions.

And in the eyes of the committee, no quarterback in the Mountain West was a better fit for the watch list than San Jose State’s Chevan Cordeiro.

We've decided that we have to join "Watch List" season! Here are our QBs to look out for based on our proprietary DETMER metric.

Did we miss a QB that just throws the ball no matter what, for better or worse? Let us know. pic.twitter.com/ofjOXK89kZ

There’s little doubt he’s been one of the more exciting quarterbacks in the Mountain West when he was on the field for the Hawaii Warriors over the last several years, throwing for 6,167 yards, 45 touchdowns, and 22 interceptions on 835 pass attempts between 2018 and 2021. That equates to a touchdown rate of 5.4% and an interception rate of 2.6%, which would appear to be right in line with what the Sickos Committee looked for in their selections.

It was especially true last season, in particular, when Cordeiro threw for 2,793 yards, 17 touchdowns and 11 interceptions in 11 games. That included three games in which he threw multiple interceptions and three others in which he threw three touchdowns, as well as four contests where he topped 300 passing yards. When the Todd Graham situation erupted early in the off-season, however, Cordeiro was one of many Warriors who left the program via the transfer portal, eventually landing with the Spartans.

Closest was Colorado State's Todd Centeio at 18, and Hawaii's Chevan Cordeiro at 19.

While Spartans fans certainly hope their path back to the top of the Mountain West won’t be too hectic, the fact remains that Cordeiro will still be one of the most entertaining players anywhere in the conference. 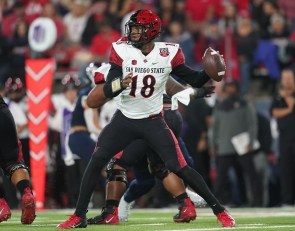 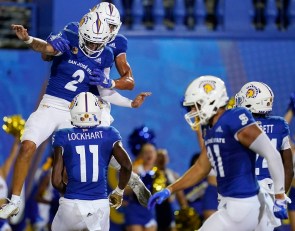