Fresno State’s star quarterback ran away with our staff’s vote as the Mountain West’s top offensive player ahead of 2022.

Taking on new heights in the Valley.

A number of our staff’s preseason honors were pretty hotly contested this year, but that is not the case with our selection for the Mountain West’s offensive player of the year: Fresno State quarterback Jake Haener.

Among players at his position who are returning to the Mountain West in 2022, Haener led the way last season with 490 pass attempts, 329 completions, a 67.1% completion rate, and 4,096 passing yards. He was also second among returning QBs with 33 passing touchdowns and 8.4 yards per attempt, with a healthy 1.8% interception for good measure.

After briefly flirting with the transfer portal, Haener decided to stick around to learn under new-old head coach Jeff Tedford, who’d helped Marcus McMaryion thrive across two seasons in his previous stint leading the Bulldogs. With an array of offensive weapons at his disposal, an assault on the school’s single-season record book isn’t out of the question. At a minimum, he’ll be the biggest reason why the corner of Cedar and Barstow is a hot spot for entertainment on Saturday nights this fall. 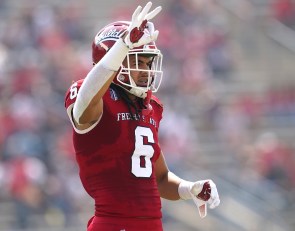