Which Mountain West secondaries are in the best shape after spring football practice season?

Who looks best equipped to defend the pass?

This group has undergone some major upheaval thanks to graduations and the transfer portal, meaning they return just one player (Nelson II) who played at least 100 snaps in 2021. Turning the page from Todd Graham to Timmy Chang, however, seems to have revitalized them as much as any other unit on the team since Lee, after being removed from the roster late in the former coach’s tenure, came back and starred in the Warriors’ spring game last month.

We may not know until August, however, who the most prominent contributors will be. With 15 defensive backs listed on the roster for the moment, Chang and new defensive coordinator Jacob Yoro will almost certainly keep the competition open as long as possible.

A unit that was definitely of the bend-but-don’t-break variety last year now faces the challenge of replacing a few starters (Cash Gilliam, Cam Lampkin, Shaq Bond). Granted, the cupboard isn’t totally bereft of experience — Anyanwu started the majority of games opposite Lampkin last year, Grayson spent a fair share of snaps operating out of the slot, and all three among Tatum, McGary, and Reynolds spent time in the starting lineup with Bond — but it’s worth noting that just one returning Aggie (Grayson) had a PFF overall grade above 70.0. In other words, there’s an element of “prove it” here that demands a little more production from all the promise.

For all of the losses that the Wolf Pack had to graduation, the transfer portal, and the NFL, the secondary remains remarkably intact. That’s good news considering that, despite facing over 33 attempts per game, only San Diego State and Wyoming allowed fewer yards per pass to opponents in 2021.

The challenge for 2022 is that, at least according to Pro Football Focus’s grading system, Nevada has to replace its top safety (Jordan Lee) and top two cornerbacks (Berdale Robins, A.J. King). Rebuilding depth at the latter position is probably the most pressing matter, but with options ranging from Essissima to Michigan transfer Darion Green-Warren and sophomores Dorian Blackwell among 22 defensive backs on the current roster, you can’t say they don’t have plenty from which to choose.

2021 was a frustrating year for the Rams pass defense, though things didn’t really fall apart on that front until November, but the upside is that they might benefit from a fresh start under new coordinator Freddie Banks and have a surprising amount of depth from which to draw.

Question is, though Floyd flashed some hands and big play ability and Howell was a Freshman All-American last year, how good can they be in year one under Jay Norvell? This isn’t a unit that hasn’t been terribly proficient about getting its hands on footballs in recent years — the Rams haven’t ranked in the top half of the Mountain West by passes defended since 2017 — so the new coaching staff might take as much time as it can get to identify its best options.

If it seems strange that a unit which gave up 8.3 yards per attempt is ranked this high, consider that they may have turned a corner late in 2021 by improving their opponent’s completion rate and YPA in November. At the very least, Nohl Williams is the best young corner in the Mountain West that no one talks about while Johnson shined when given more playing time down the stretch.

If the cornerback situation has upside, then, the real questions start at safety. Both Phillip Hill and Bryce Jackson entered the transfer portal this off-season, so Player and Baldwin could be real X-factors whose play could help determine the Rebels’ ceiling this year.

The Cowboys might be replacing the bulk of last year’s starts, but White started three of the last four games in Esaias Gandy’s stead while Glinton had a pair of November starts at the nickelback position and both Harrell and Hawkins had previous starting experience at Wisconsin and Ole Miss, respectively. Given this coaching staff’s track record, chances are they’ll figure out how best to deploy their new athletes.

This unit had some very uneven results from week to week last year, but when you realize that only San Diego State allowed a lower completion rate and that a below-average November obscures some solid early-season work, it’s easier to recognize Rocky Long has indeed been up to something here.

Can this unit take another collective step forward? Combs made some major improvements throughout the fall and Wilson held his own when given more playing time in the second half of 2021, while Reed II further established himself as a reliable anchor, so the safety trio has big potential. Cornerback has a little more uncertainty past Martin, who’s now a redshirt senior, but bet against Long at your own risk. 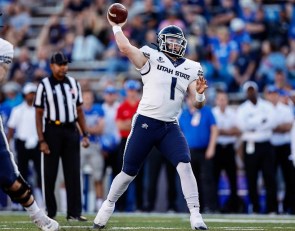 The Mountain West conference is always full of thrills, as well as twists and turns, and the 2022 conference has started in exactly that (…)