Bulldogs looking to claim a title

Who cares it took an extra day

The CIT Championship is here at the HTC Center in Conway, S.C! The Fresno State Bulldogs are coming off of a blowout win over Southern Utah in the Semifinals. The Chanticleer of Coastal Carolina are coming off a buzzer beating win over South Alabama. These two programs are meeting for the first time in school history for The Basketball Classic Championship.

Keys to the Game: Coastal Carolina

The Chanticleer are playing in a postseason championship game for the second straight year and are looking to be the first Sun Belt team to win a postseason championship. Coastal Carolina is led by Senior Guard, Rudi Williams who is putting up 19.7ppg and shooting 60% from the field in the tournament. The Chanticleer have an another dynamic Guard in Vince Cole who is averaging 15.3 ppg in this tournament.

If Coastal Carolina wants to bring home the championship, it will start on the defensive side of the ball. Finding a way to slow down Orlando Robinson. They have to get the ball out of Robinson’s hands. Secondly, control the tempo and win the transition game. Offensively Coastal Carolina has to limit turnovers and find ways to score inside the paint. Chanticleer can hit shots but the Bulldogs defense is one of the best in the nation. Coastal Carolina has to find multiple ways to score and stretch out the Bulldogs defense.

Keys to the Game: Fresno State

Fresno State is looking for its first postseason title since the 1983 NIT. Many people believe this year’s squad was a NIT caliber team. After not being selected into the NIT, the Bulldogs have an opportunity to show everyone why they should have been in the tournament.

Fresno State is led by Junior Forward Orlando Robinson who is averaging 19.4ppg and 8.2rpg. This could be Robinson’s last game as a Bulldog as some reports have indicated Robinson will be Declaring for 2022 NBA Draft. The Bulldogs also have Junior Guard Isaiah Hill who is putting up 10.1ppg. If Fresno State is going to capture its first postseason title since 1983, it will start with defense. The Bulldogs did a great job against Southern Utah defensively holding them to under 50 points and will need to do more of the same tonight. The Bulldogs have to contain Coastal Carolina backcourt. Offensively the Bulldogs need to keep getting consistent bench production. Donavan Yap and Destin Whitaker have both been a great boost offensively off the bench. Lastly, hitting shots. The Bulldogs shot 52% from three and went an overall 11-21 from the perimeter last time out. This helped Robinson see less double teams and let him go 1 on 1 inside the post. This will be a very physical game!

This is one of the four final games left in this year’s College Basketball season. Can the Chanticleer of Coastal Carolina capture their and the Sun Belt conference its first postseason championship? Or will the Bulldogs of Fresno State overcome its up and down season and get its first postseason title since 1983? 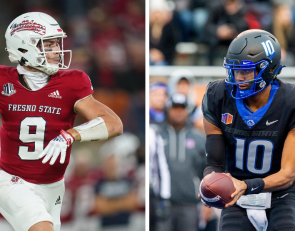