Of course, refs made an appearance

Colorado State needed a last-second shot to hold off No. 7 seeded Utah State to move onto the semifinal round of the Mountain West tournament.

With the game tied at 51, Isaiah Stevens drove to the basket and when Aggie defenders collapsed on him, Stevens found Chandler Jones who received the pass and scored what would be the game-winner.

THE RAMS ARE MOVING ON.
Chandler Jacobs wins it for @CSUMBasketbball. pic.twitter.com/ZJeqMlBakT

The game was not a clean one, hence the low scoring game and there was one play that will be discussed and it was the charge against Utah State’s Justin Bean late in the game.

The Aggies were down two points with under 20 seconds left as they stole the ball from the Rams. Bean was going hard down the court, got a pass, and tried to split two defenders. Contact was made but it seemed that neither Rams player was set and the contact was made but it did not seem a charge was warranted.

The case against Bea was that he was going fast and a bit out of control trying to get a late bucket. CBS Sports’ college basketball analyst Wally Szczerbiak was not a fan of the call against Utah State.

.@wallyball really did not agree with a late charge call on Utah State's Justin Bean. pic.twitter.com/Vqc66hxcky

Colorado State got the win despite their star player David Roddy scoring just 13 points, and as a team, the Rams shot just 3 of 18 from beyond the arc.

Head coach Niko Medved felt this team was not 100% ready for the game as some were nervous to play Utah State.

“I thought there were some nerves for some guys tonight, a little bit. You know, I know these guys enough to sense it, you know, kind of fumbling the ball a little bit,” Medved said. “And this is a little bit of a — even though we’ve been in a lot of the games, this is a different stage. I think we’ll play a little bit looser for tomorrow.”

The Aggies were the No. 7 seed and that was more due to their inconsistent play compared to their talent which at times was on par with the top teams in the Mountain West. That showed as the Aggies lost by just two points to the Rams.

Colorado State is now going to the semifinals where it will tip off in the late spot at Midnight Eastern on CBS Sports Network and will face the winner between No. 6 Fresno State or No. 3 San Diego State. 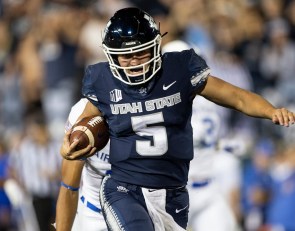