Toward the end of the 2021-22 campaign, the Aztecs are playing very effectively as a team- just in time for March.

On paper, the ’21-22 season has not been San Diego State’s most stellar basketball performance.  Taking a closer look however, the record is a bit deceiving. For starters, the Aztecs played their hardest non-conference schedule ever- right after their three top shooters Matt Mitchell, Jordan Schakel and Terrell Gomez graduated last season.

In regular conference play, during their first matchup against then undefeated #23 Colorado State, the Aztecs eviscerated the ranked Rams 79-49, and the humiliating 30-point margin became a new record against a ranked team.

In conference play, the Aztecs lost four games.  They dropped their second match against Colorado State 58-57; they lost against Utah State 75-57 before beating them 75-56.  The Aztecs were also tragically swept by Boise State losing the first game 42-37, and the second time to Aztec fans’ horror another 58-57 loss after a controversial last-minute call.

Naturally, San Diego State is overdue for a win against the Broncos.

Toward the end of the 2021-22 campaign, the Aztecs are playing very effectively as a team- just in time for March. Several misfiring elements of their program are straightened out.  The most remarkable change has been in offensive play, spearheaded by Matt Bradley, who has become an explosive high-yield scorer for the Aztecs.  His ability to manufacture points is remarkable.

How UNLV can win the Mountain West tournament

Let’s analyze why the Aztecs will win the Mountain West Tournament again.

1. sdsu IS BETTER THAN THEir record suggests

While a 21-7 record is respectable at the end of regular conference play, it is arguably worse than the Aztecs strive to perform.  Nonetheless, all three non-conference losses were against SOLID Quad-1 teams: BYU, USC and Michigan. When the Aztecs played Michigan in Ann Arbor, it was a buzzer-beating three pointer that prevented the Aztecs from going into halftime with the lead.  During the second half, the Aztecs, unfortunately, fell apart offensively and the Wolverines punished them.  When they lost to BYU during an away game, lopsided officiating seemed to be a factor.

2. THE AZTECS still hAVE tremendous DEPTH

Cal graduate transfer Matt Bradley has added an extra gear for the Aztecs, and can shoot with and against the best of players.  Senior forward Nathan Mensah is an exceptional shot blocker and rebounder.  Bradley and Adam Seiko shoot 41.7% and 41.8% from the perimeter respectively. Guard Trey Pulliam might be one of the best clutch mid-range shooters the Aztecs have ever had.  Even when gassed, Tahiru Diabate and Joshua Tomiac can come in, each at 6’9″ and make things happen.  When healthy, Aguek Arop can also score, rebound and defend like a sixth man.  Chad Baker-Mazara is another X factor, being able to score from short, medium and long distance, shooting 38.5% from the arc.  Even behind their bench there is seemingly another wave with Keith Dinwiddie and even other players like Cade Alger… The depth is profound…

Bradley has worked out his early season struggles, and has turned into an unstoppable go-to player.  Averaging 17.8 points, 5.3 rebounds and 2.7 assists per game, he scores at the arc, from mid-range and can take it to the rim with relative ease. 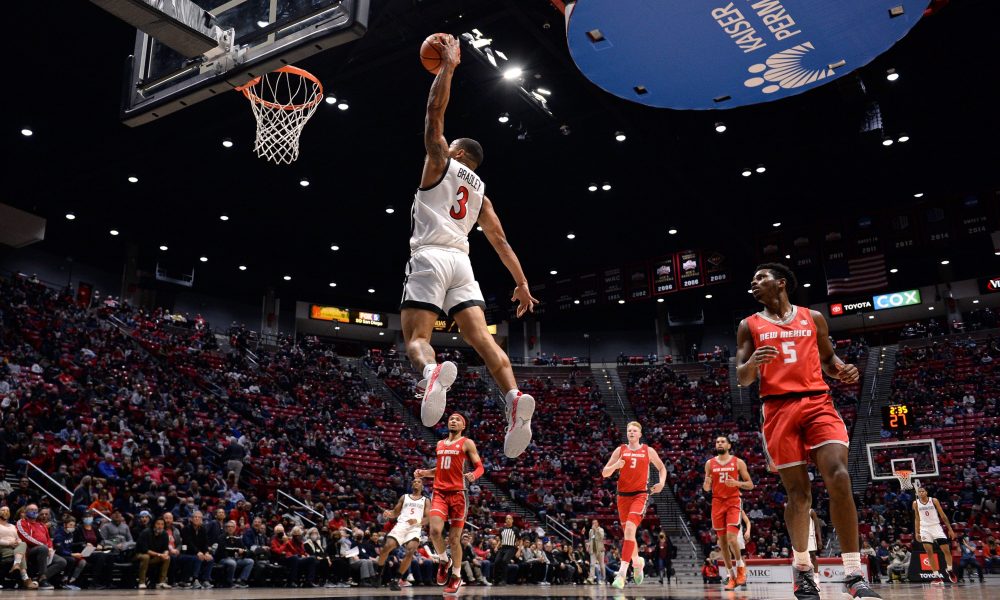 Despite losing three top shooters in after last season, the Aztecs still host a number of senior players, including Mensah, Arop, Pulliam, Diabate, and Tomaic.  Matt Bradley and Adam Seiko are also senior players planning to return in the 2022-23 season.

These are tried-and-true seasoned college players, and are likely to be highly effective going into the Mountain West Tournament and presumably the 2022 NCAA Tournament.

Brian Dutcher is an incredibly seasoned, talented and level-headed steward.  He is a coach’s coach.  Son of Jim Dutcher, long time Minnesota basketball head coach, Brian was NCAA legend Steve Fisher’s Assistant Coach and Head Coach-in-Waiting for 27 long years, which, when you think of it, is crazy.  Dutcher assisted Fisher for nine at Michigan, and then eighteen more at SDSU.  He is as skilled and patient as it comes. 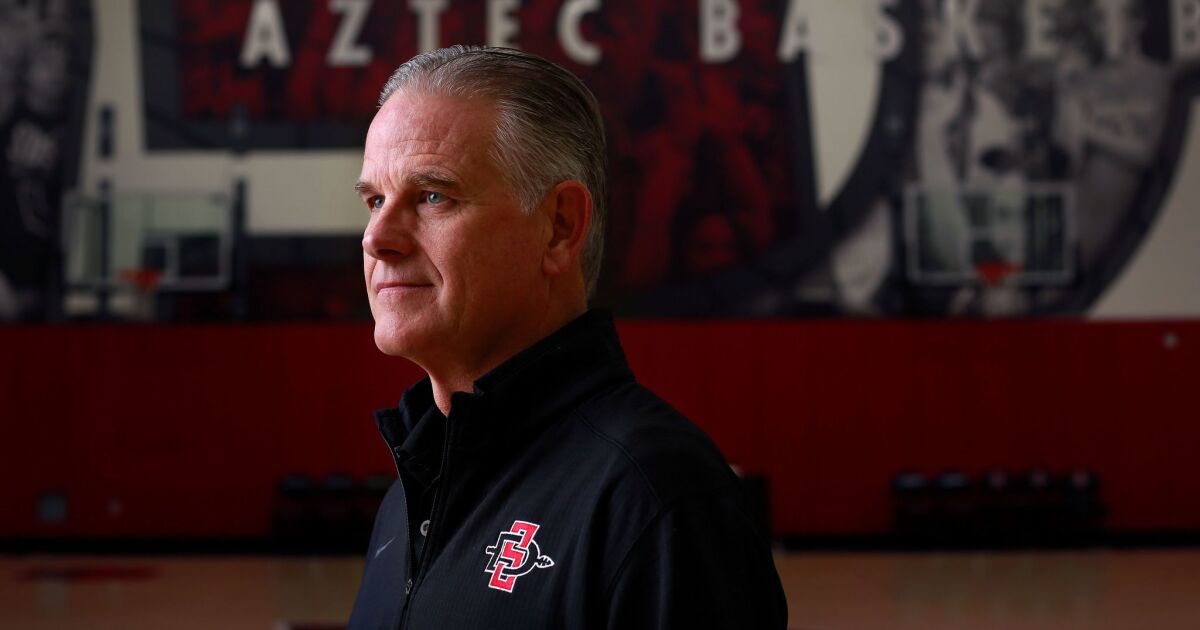 Dutcher made his first return to Ann Arbor last fall to face Juwan Howard, his former basketball recruit, NBA legend, and now head coach of the Michigan Wolverines.  It was cathartic watching Dutcher approach Howard to extend a hand, only for Howard to grab and crush Dutch with a bear hug.

As most of us know by now, Dutcher recruited the Fab Five when he was Assistant Coach at Michigan.  Brian Dutcher is also highly decorated both in the Mountain West and nationally in the NCAA, and his success story is still being written, and his stewardship helps the Aztecs play elite ball.

Boise State is favored to win the 2022 Mountain West Tournament, but as we all know, being the favored team often does not lead to victory.  The Aztecs will win this tournament if they want it bad enough.  They have the skills, the leadership, the momentum and the swagger to go all the way in 2022.