A little bit of a mess but Warriors have a new coach.

On Saturday it was announced that former record-breaking Warrior Quarterback Timmy Chang will return home to take the helm of the University of Hawaii Football program. The announcement caps off an eventful job search and now the program has its head man and a new direction.

I’m not sure if eventful is the perfect word to describe the job search and past week for the University of Hawaii Football program but it certainly helps to paint a picture. Since the resignation of Todd Graham last week Friday, message boards and Twitter have been filled with rumors and suggestions of who the next head coach should be. At first, it was the #MianoforManoa campaign in support of former associate head coach Rich Miano. Then the winningest coach in school history, June Jones threw his name in the hat and Miano actually pulled his own application in support of his former boss. I’ve been on the edge of my seat since Wednesday constantly updating my phone and looking for any hint of an announcement and I know I wasn’t alone.

Friday came and whispers of June Jones returning to the Warriors grew louder and louder until KHONs Rob Demello broke the surprising news that June Jones had been offered the position and turned it down. No details were released at that time and fans didn’t know whether to be mad at Jones or the University. Then we learned the details of the deal that Jones turned down and the blame went from him to Athletic director David Matlin. This has been a very emotional offseason for the program and those who support it and many were upset by the news. Jones made a hard push for the job through the media on Friday evening and the University pushed back in their own Zoom press conference on Saturday afternoon saying that Jones showed “zero integrity in this process” citing his use of the media to gain public support.

It got ugly between the two parties and it was sad to hear the University speak so negatively about a man who did so much for the program. If they really didn’t want him for the job, they should’ve told him ‘no thank you’ instead of offering him a bogus two-year deal in an attempt to appeal to the public that they made an offer and Jones turned it down.

Not only did the University get into an ugly and very public back and forth with Jones, but they also made their eventual hire seem like a second choice. If June Jones wasn’t offered the job and it was made clear that Timmy Chang was their guy from the beginning, the public would probably be ecstatic to have a born and raised local product like Chang being named the head coach.

Instead, it leaves a weird taste in your mouth. On one side, you are excited for Timmy Chang and the direction he will take the program, but on the other side, you have to be wondering what the hell just happened?

We shouldn’t be surprised that this job search has been so poorly handled. In fact, this is right on par with an athletic director who instead of getting in front of the media for a press conference to answer questions would rather release a paragraph-long written statement.

If this is not the end of David Matlin’s tenure, I don’t know what it will take. Remember that this is the same guy that heard all the complaints about Graham and did nothing about it. He has shown his incompetence on numerous occasions and his time should be up.

That being said, it was the way that the University handled this situation, not the actual hire that I think upset most fans. In fact, I completely support the hire of Timmy Chang. He checks the boxes.

He was born and raised in the Islands, played for the University and broke national records, has a solid coaching resume, he is young and hungry to succeed, and most importantly, I think that he will be able to unite and energize a team that surely needs it after what they’ve been through. He has already jumped on board with the teams new #BRADDAHHOOD campaign and I think the players are excited to have him as their new coach.

As a player, Chang gave us plenty of special moments and he definitely saw his ups and downs during his career. From the crowd chanting his name to get him into the game during his freshman season, to being booed by the home crowd after underperforming, to my personal favorite of him handing the game ball to his father who worked for the TV crew after breaking the NCAA all time passing record, we remember what he has done for the University as a player and look forward to what he will accomplish as a head coach.

So fans, let’s give Timmy Chang a fair shot. Show him the same support that you would’ve shown Coach Jones because like it or not, he is the leader of our program and at the end of the day, we need to support the Bows.

Timmy deserves it, the coaches who are retained and the new staff deserve it, and most of all, the players deserve it. They have been through hell these last couple of months and these are the guys who have chosen to stick with the program. It is a new day and the sun once again shines on the University of Hawaii Rainbow Warriors. As always, let’s go Bows! 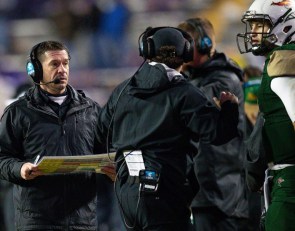