Wyoming’s bowl opponent, the Kent State Golden Flashes, are a major MAC player. We talk with Allen Moff of the Record-Courier to learn more.

The Pokes will tangle with MACtion one more time.

The Wyoming Cowboys will be back on Boise’s blue turf to face the Kent State Golden Flashes in this year’s Famous Idaho Potato Bowl. The MAC runners-up played a major role in college football’s most unpredictable conference, so to answer our questions about Kent State football, we reached out to Allen Moff, who covers the Golden Flashes for the Record-Courier.

Mountain West Wire: Kent State came into the year with fairly high expectations but weren’t quite able to finish the job in the MAC championship game against Northern Illinois. For those readers who may not follow the Golden Flashes closely, how would you describe the overall season in a nutshell beyond the title game loss?

Allen Moff: The Flashes have only won one MAC title in program history (1972), so the season has to be considered a success overall despite the disappointing showing in the MAC Championship Game. They were picked to win the East Division and they delivered, earning their first MAC East title since 2012. The program has taken another step in the right direction this season for sure.

MWW: Dustin Crum was one of the best quarterbacks anywhere in the Group of 5 last season, so how well did he follow up that campaign and what would you say has been his primary strength in 2021?

AM: Crum had another huge year for the Flashes. He became just the second player in program history to be named MAC Player of the Year. His strength is his leadership. He runs Kent State’s up-tempo, run-pass/read option offense extremely well, is able to make plays with his arm and feet, and throws the ball very accurately down field for the most part.

MWW: High-scoring offenses are typically thought of as being pass-first, but Kent State seems to do a lot more damage on the ground between Crum, Marquez Cooper, and Xavier Williams. How do you think the Flashes will deploy that trio against Wyoming?

AM: When Kent State reached 200 yards rushing against MAC opponents this season, its record was 6-0. When the Flashes fell short of 200, they went 0-3. Running the football is always the emphasis, and when they do that successfully it opens up the entire offense. They will look to pound the ball up the middle with Cooper as always, although doing that successfully against Wyoming certainly will not be easy.

MWW: Wyoming will want to establish its running game against Kent State. Who do you consider to be the most high-impact stopper in the Flashes front seven, and why?

AM: Kent State struggles to stop the run, especially against teams that are physically strong and can take advantage of KSU’s lack of size up front. 330-pound sophomore nose tackle CJ West is the only player on defensive depth chart who weighs above 272.

MWW: Conversely, statistics suggest that opponents have attacked Kent State early and often through the air, facing over 36 pass attempts per game and intercepting 16 passes in the process. If the Cowboys are tempted to try their luck there, who in the Flashes secondary do you believe is most likely to make them pay for it?

AM: Starting corners Elvis Hines and Montre Miller have both made and given up a slew of big plays this season. They are often left isolated on outside receivers while the Flashes stack the box to stop the run. They win some, they lose some.

Going back through some #MAC prospects and #KentState DB Elvis Hines has played some fantastic football through two games.

Shows stickiness in man coverage, breaking on passes, flipping his hips and good spatial awareness in zone. Up to 3 INT’s in 2021.

MWW: Lastly, how do you see the Famous Idaho Potato Bowl playing out between Kent State and Wyoming?

AM: These games are so tough to predict. This I know – Kent State will come to play. The Flashes won their first bowl game in program history just two years ago, and have only played in five bowl games, so this is still a big deal to them. Not sure how Wyoming will approach it. I expect an entertaining affair, and I’ll go Kent State 31-28 – although I won’t be surprised if the final outcome is drastically different than my guess. 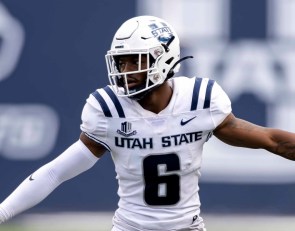