This is a weird bowl game and we love it

When it was announced that late-night host Jimmy Kimmel was sponsoring a bowl game, we all thought it was a joke and had a good laugh. For the record, it is a good joke and that is Kimmel’s craft.

This bowl game is no different or weirder than the Tax Slayer Bowl game or insert dumb sponsor here. Kimmel is leaning into the absurdness of the college football post-season that is unique, dumb, and awesome.

The original Popeye’s Bahamas Bowl did not even have a Popeye’s restaurant so a makeshift restaurant was put together to provide food of the sponsor namesake.

Kimmel is a showman and had players from both Oregon State and Utah State — yeah, we should mention who is in the is game — on his show for some fun.

“Where the hell is Logan, Utah?” Kimmel jokingly exclaimed while introducing the Utah State football team as members of the Jimmy Kimmel Live studio audience.

Here are the Oregon State players getting their turn to shine on TV.

Kimmel also did an extensive Q&A with The Athletic which went into how he wanted to sponsor a bowl game, and be the first human to earn that honor.

Here are a few fun quotes.

I’ve always been tickled by college bowl games and how quickly we adapted to this idea that it was normal to say the Tostito’s Fiesta Bowl, or whatever corporate sponsor is attached to whatever game. This kid Jack Carey that worked here at the show, he said it would be great if you had a bowl named after you, and I agreed, but I didn’t think it was going to be something that would be possible. And I figured if even if it was possible, I would have to pay millions of dollars for it. But it turns out we just did it for free.

He really wanted it to be Arizona State vs. UNLV, the two schools he went to.

I was hoping it would be Arizona State versus UNLV, but then UNLV went on an 0-8 run, so that didn’t seem likely. It would have been fun. Because it is kind of strange, and it was not by design, that the two schools I went to (are in) the Mountain West and Pac-12. Of course it was different at the time. I think we were in the PCAA (Pacific Coast Athletic Conference) when I was at UNLV, and there were only 10 (teams) in the Pac-12 at that time. It’s a coincidence, but it’s a strange coincidence.

There is a sandwich being sold and the game and Kimmel was very much involved.

Also, the mascot! THE MASCOT IS WEIRD.

This is what the postseason should be all about. These bowl games are just a TV show and Jimmy Kimmel knows how to do that. 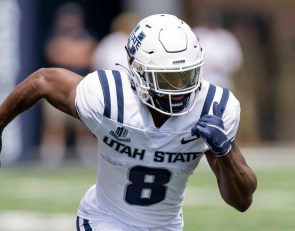