The Wolf Pack quarterback was as prolific as ever against Mountain West defenses and is our staff’s pick as the conference’s top offensive performer.

Nevada quarterback Carson Strong has often made throwing a football look way too easy over the last two-plus seasons, which is why he stands alone among our staff’s individual honorees as the one play to repeat as a player of the year.

Strong was our pick as postseason offensive player of the year in 2020 and our preseason pick in the summer, as well, and he didn’t do anything on the field this fall but build an even stronger case as one of the best signal-callers in the country. He completed 70% of his conference-high 523 pass attempts, the second year in a row he reached that rate, and led the Mountain West with 4,175 passing yards and 36 touchdowns against just eight interceptions. Furthermore, his 90.0 grade from Pro Football Focus was far and away the best of any quarterback in the conference.

While it remains to be seen whether Strong will play in a bowl game for the Wolf Pack or if we’ve already seen the last of him, it’s difficult to imagine that the sky won’t be the limit once he reaches an NFL destination next year.

Carson Strong has thrown for 288 yards and four touchdowns tonight and we’re only a little over halfway through the third quarter.

There’s no better deep passer in this draft class — these numbers aren’t a result of YAC. 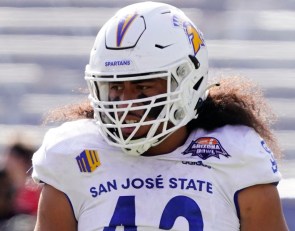