By Way of Comparison: The Rest of the G5 Field

What are the big takeaways here?

A lot of people were shocked last Tuesday when Cincinnati came into the initial rankings having faced almost the exact same strength-of-schedule as they had last season and were slotted in at #6 overall after starting at #7 in 2020. It seems pretty clear, though, that one top-ten win is only going to take you so far when your next-best win is either a depleted conference foe that hasn’t yet beaten any bowl eligible teams (UCF) or a sub-.500 MAC team (Miami of Ohio). That, combined with the reality that the Bearcats have played two one-score games against subpar opponents in the last three weeks, rightfully has the committee feeling dubious.

BYU, meanwhile, ended up almost exactly where I projected them, though blowing out FCS Idaho State won’t do anything for their overall strength of schedule. They, more than anyone else in the middle of the rankings, might be subject to how their defeated opponents finish in the weeks to come (given their shared wins against Arizona, Washington State, and Utah, they have a lot in common with San Diego State and Utah State).

The biggest shock last week, however, was the overall dearth of Group of 5 teams. I’d wager that’s likely to change a little bit, even as the field thins a bit with Fresno State and SMU both losing on Saturday, because some competitors have continued to impress in different ways. Coastal Carolina won again without Grayson McCall under center, for instance, while UTSA passed its toughest test yet against UTEP with flying colors. None of the teams who could sneak into the rankings, however, have a win on their ledger like San Diego State’s victory over Utah, so it’ll be interesting to see how the committee balances dismal strength of schedules against Power 5 teams with multiple losses.

So what do I think the second CFP top 25 will look like? Read on. 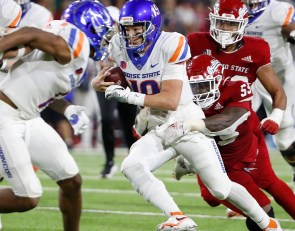 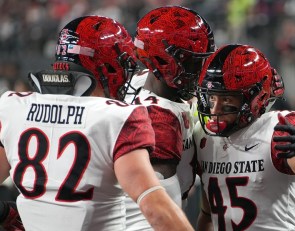