Mountain West should be receptive if Cougars want to join a league.

OK, OK, OK. Don’t just close the page since this article mentions BYU but hear me out. Just recently, it was discovered that Boise State and the AAC were close to having the Broncos join the Central and Eastern conference but there was not a home for the other sports.

The reason is obvious since the American is a step — as small as it may be — above the Mountain West. So, an easy way to close that gap and surpass would be to bring the Cougars to the league, and likely as a full-member but not required.

BYU is currently having its football media day and athletics director Tom Holmoe was asked how the soon-to-be 12-team playoff will impact the Cougars status as an independent.

In short, the door is not closed on joining a league, plus any league they join in short order would be either the Mountain West or the AAC.

Athletic Director @TomHolmoe and Head Coach @kalanifsitake think that an expanded playoff format could give @BYUfootball a better shot in the postseason. #BYUMediaDay #BYUFOOTBALL pic.twitter.com/A5qY3ee1Vk

“I think it’s good news. I’ve always been a proponent of an expanded playoff,” Holmoe said of a possible College Football Playoff expansion. “They’ll figure that out, but for them to come out and have an announcement from the CFP level, there’s going to go to twelve. And as I followed in the last couple days, it looks imminent, and it’s just a matter of where it is time wise.

“It’ll help us whether we’re an independent or in a conference or whatever it might be. It’ll help us in that there’ve been too many times when we’ve been just on the verge of getting in, on the outside looking in, and the numbers haven’t been just right, going back years and years.”

Clearly, as an independent it would help the Cougars with more chances and last year had they defeated Coastal Carolina, they would have been in the expanded playoff field. However, that type of schedule was watered down due to COVID-19 with no Power 5 teams on the slate after originally having six.
Those circumstances helped BYU a lot. The team would have been even if playing those P5 teams but being undefeated late in the year seems unlikely. The six at-large spots help a lot for any independent team looking to make the field.

However, joining the Mountain West would be a great way to bolster BYU’s chances of making the College Football Playoff and also help the league get a boost from a big name program. Adding the Cougars would put the Mountain West back on top as the best Group of Five league and arguably with the two biggest brands in that bunch with Boise State and BYU.

This also could solve some of Boise State’s issues about being in the Mountain West. Adding the Cougars would bring in another competitive team and an increase in TV money. The one sticking point would be about how the Broncos currently earn a larger share but perhaps that could be worked out with an overall increase by adding BYU.

and create permanent rivals like BYU vs. Boise State and Utah State or Nevada vs. UNLV, San Jose State vs. Fresno State, Colorado State vs. Wyoming and so on.

This will not happen for a while since the new playoff is at least two seasons away from happening and BYU would likely want to test the waters. The things the Cougars would be looking for would be how close they get and how the Group of 5 champions are treated.d So, this could be at least five years away.

This would be a clear win-win for the conference and BYU and conversations should be starting now. 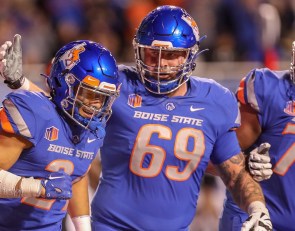