Taking an early look at the first out-of-conference football opponent.

The Aztecs will continue to play Saturday nights in the Carson facility in 2021 and will host New Mexico State to open the season. The last time these two teams faced off was the Aztecs blew them out in New Mexico 31-10.

Considering COVID, SDSU is coming off a mediocre 2020 season with a 4-4 record for Brady Hoke’s second run as Aztecs head coach. Quarterback Lucas Johnson didn’t pull all the elements of his game together for the Aztecs to run their offense, but it was difficult to really ascertain what was going to happen last season with Mountain West sports.

Going into the 2021 season, there’s a little more competition for QB1 with Lucas Johnson and Mississippi State transfer Jalen Mayden. This spring game didn’t give us new details and only will spark competition until rosters are finalized in a few more months.

Aggies At a Glance

New Mexico State was one of three programs in the country that canceled its 2020 season due to the pandemic. The team had planned to play out-of-state like the New Mexico Lobos, but with the university suspending all athletics this team hasn’t played a snap since 2019. Factoring in their Independent status and the revenue generated from football sustains most of the programs makes a bunch of sense why it really didn’t make sense to continue if no one was open to scheduling the Aggies.

However, the Aggies in 2021 did some creative problem-solving. The university found a way to be the only FBS team to play this spring against FCS opponents. In what becomes essentially a pre-season for the Aggies, they went 1-1 to FCS opponents, Tarleton State and Dixie State.

Juwuan Price is a redshirt freshman RB/KR who stood out in the spring. Price started his collegiate career at Ole Miss before finding greener pastures under head coach Doug Martin. In two games, Price went for 222 yards rushing with 1 rushing touchdown and had 229 kick return yards with 1 return touchdown.

So when these two teams come to play it’ll be under close-to-normal circumstances. The Aztecs will be hungrier to open the season given their disappointing 2020 season. For the Aggies, it’ll be a good temperature check to go to the west coast and play a true away game in 2021. No chance for the Aggies here. 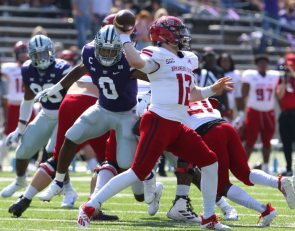 Is A 12-Team College Football Playoff Becoming A Reality?

Could College Football Playoff Expansion Bring BYU Back To Mountain West? Mountain West should be receptive if Cougars want to join a (…)

Safety in An Online Casino: How Can You Protect Yourself?

Gambling online is a fun way to relax and avoid playing in sites that scam you and rob you of that joy. Take precautions because if you sign (…)

Your Reward For Winning the Mountain West Football Title? The Jimmy Kimmel LA Bowl. The late-night talk show host has scored the (…)

In Coach Lobotzke We Trust How will the Falcons replace five starters? Contact/Follow @Sean or @MWCWire We are (…)

The NFL mini-camps are well underway and with many NFL drafted players leaving their college teams, the college football betting lines for (…)

The San Jose Spartans were the cream of the Mountain West crop last season, closing the curtain on the truncated 2020 campaign with an (…)

Contact/Follow @SamMcConkie & @MWCwire Do the Aggies have a QB battle on their hands? In short, not really. (…)

The Best LB Unit in the MWC? The Heart of the Defense Contact/Follow @Sean or @MWCWire A few weeks ago marked (…)

The Best Betting Apps for NFL

AAC Wanted Boise State For Football-Only; But Non-Rev Sports Had No Takers