NFL Talent in the Trench

A few weeks ago marked the launch of a series of deep-dives into the Falcons various position groups; specifically how they measure up versus last year. Previously we looked at the Secondary, if you missed it the content can be found here.

Today we’re going to shift our focus to the defensive lineman. It’s in these very trenches that Air Force has churned out at least one if not more All-Conference performers pretty regularly. Last year, that distinction came seemingly out of nowhere in George Silvanic.

Technically, Silvanic didn’t come out of nowhere, he was on the offensive side of the ball prior to the 2020 season. But after a very good season on defense, Silvanic has found himself on an NFL roster after being signed by the Los Angeles Ram as an undrafted Free Agent. A pretty remarkable story!

The Falcons aren’t just replacing the aforementioned NFL bound Silvanic from the defensive line, they are also losing experienced players like Joey Woodring and Michael Purcell to graduation.

Combine those three seniors with underclassmen like Nokoa Pauole leaving, and the defensive front is going to look drastically different from 2020. Even the long term projection of talent is a little bit in flux with the departure of last years prize commits Blake Burris and Ryan Ives, both 3-star prospects have transferred out of the Academy for Texas Tech and Princeton, respectively.

Thankfully defensive coordinator John Rudzinski or “coach Rud”, has a potential NFL caliber performer returning to the fold this season in Jordan Jackson. Like many players, Jackson elected to retain a full year of eligibility by opting for a turnback in 2020.

This is a guy who brings serious cred to the unit. Jackson is a multi-time All Conference selection in the Mountain West, and his presence alone helped enable some of his teammates to shine by drawing so much attention from the opposing blocking scheme. This is a name to earmark as a darkhorse for the defensive player of the year. Surely he will also surface on the MW Wire’s heralded preseason countdown of the Conferences top players. Here’s a hint, he should be near the top.

Despite the exodus of players to graduation, transfer and even the NFL, the Falcon defense was still able to distribute a lot of playing time to the defensive line due to injuries and the pandemic. Junior to be Kalawai’a Pescaia saw plenty of action, including starts last season and should certainly factor in the starting lineup.

T.J. Love is another name to watch for as roster begins to take shape. Like Pescaia, he too is a junior and while it was by a lesser volume, he worked his way onto the field in 2020. This could provide valued experience to a front that will look very different this season.

And lastly, Jayden Thiergood should certainly make a push for snaps as the offseason progresses. Part of a much larger than usual crop of freshman who earned playing time last season, Thiergood is a name that may be even more prevalent in 22′ and 23′.

Three of the most intriguing players on the defense may end up playing on the defensive line this season. Following the mold of George Silvanic, McKenly O’Neal is an offensive convert who showed up on the opposite side of the ball in 2020. Air Force can only hope he has the kind of impact that Silvanic did.

After a sophomore year that saw Christopher Herrera just keep getting better in 2019, he is back with the team for 2021 He saw the field early, and the potential is certainly there for an impact season working alongside the likes Jordan Jackson and crew.

Last would be former 3-star commit, Brandon Gooding. He saw the field some last year as part of an outside linebacker rotation, but may profile just as well back at his recruited spot on the defensive line. 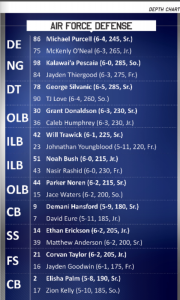 It doesn’t sound right to suggest that a positional unit will be even stronger after one of the departures from the lineup are in the NFL, but that very well could be the case this season. This is not an indictment on the cast from 2020, but more of a reminder just how good Jordan Jackson and Co. could be.

Simple math will tell you with all the departed players from last year on a base front that only has three d-lineman, the starting lineup will look different this season. Our friend NittanyFalcon over at SB Nation put his perspective on what the potential depth chart could look like this year, and its also a very insightful read; you can check it out here.

When you consider the mix of experience from rotational players last season, with the return of previous starters like Christopher Herrera and Kalawai’a Pascaia; all of whom stand to benefit from all the attention that Jackson will warrant, its reasonable to expect good things from this group.