Where is Jackson projected to go in the NFL Draft?

Warren “Action” Jackson is set to be the next Colorado State receiver in the NFL. He introduced himself to the college football world in 2017, his freshman year, by catching two touchdown passes (including a Mossing of Anthony Averett) against Alabama. He finished his career at CSU with 124 catches for 1,789 yards and 14 touchdowns.

Jackson sat out the 2020 season due to the uncertainty surrounding COVID, instead choosing to prepare for the NFL Draft. He projects as a possession receiver and will force his way onto the field with his play. His 6’6″ height and strength allows him to play through smaller defensive backs. Jackson has never been a speed guy, but can surprise you with how athletic he actually is.

Jackson is the receiver who makes a 50/50 ball into more of a 60/40 ball in his favor. He’s so tall and lengthy, with a nearly seven-foot wingspan, that you can just throw the ball up and there’s a decent chance he will come down with it.

Jackson is also a strong run blocker. He willing puts himself into positions to help the running game. Jackson can also use that strength to run through the defender in the open field.

He’s also an excellent boundary receiver. Jackson uses his size to box out the defender along the sideline, so only he can make the play and the defensive back would have to commit a penalty to stop him.

Jackson is slower for a receiver and not that explosive, either. His vertical jump (33.5 inches) is not that good for the receiver position, though it may not matter much given his inherent size advantage against most cornerbacks.

Jackson’s consistency in jump ball situations will be of interest to a number of teams. “The size, the ability to just go get the football and high-point it — he’s been able to do that (consistently),” ESPN draft expert Mel Kiper Jr. said. “He’s quick and he’s got enough of a burst. He’s an interesting guy (for teams) to think about, and I think on Day 3 we’ll be talking about Warren Jackson.”

Jackson is expected to be anywhere from a late Day 2 pick to a Day 3 pick. 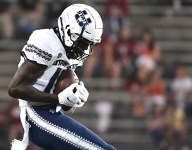 Utah State vs. Air Force: Keys to an Aggie Victory, How to Watch, Odds, Prediction

Boise State vs Oklahoma State: Game Preview, How To Watch, Odds, Prediction Broncos are a home favorite over a Big 12 team (…)

Hawaii vs. San Jose State: Keys To A Warriors Victory

Hawaii vs. San Jose State: Keys To A Warriors Victory Can Warriors get an upset? Contact/Follow @MWCwire Hawaii (…)

Nevada Vs Kansas State: Game Preview, How To Watch, Odds, Prediction The Wolf Pack hit the road to take on Kansas State on (…)

Utah State vs. Air Force: Keys to a Falcons Win, How to Watch, Odds, Prediction

Utah State vs. Air Force: Keys to a Falcons Win, How to Watch, Odds, Prediction The Falcons and Aggies both kickoff conference (…)

Nevada Takes Care Of Business In Win Over Idaho State