The Rams face the Bulls in the NIT

Who are the Bulls?

Colorado State is the second team out of the NCAA tournament. With Louisville opting out of the NIT, this put the Rams in the lead for the #1 overall seed in the NIT. They will face the #4 seeded Buffalo Bulls out of the MAC.

Controlling what we can 👊

What to know about Buffalo:

The Bulls didn’t have a terrible overall record, they just don’t play in that strong of a conference and didn’t have many good out of conference opportunities. They took Syracuse to OT, but that was about it. Buffalo is ranked 79th in the last NET rankings, but they are a talented team despite losing to Ohio in the MAC Championship by 15 points.

Only five spots behind CSU in the rankings, with similar offensive (91st) and defensive (56th) efficiency metrics. A good, but not great team that didn’t have luck roll their way.

The Bulls only had one Quad 1 or Quad 2 victory all season. It was a 20 point Quad 2 road win over the same Ohio team they lost by 15 points to in the MAC Championship.

Williams is a 2nd Team All-MAC performer this season. The 6’5″ 206lb forward was Buffalo’s leading scorer this season, averaging 17.4 points per game. He also chipped in 6.8 rebounds and 2.4 assists. A very David Roddy like stat line in a slimmer body.

The third Buffalo player selected to the All-MAC Second Team. Graves is the Bulls third leading scorer behind Williams and Mballa, averaging 14.3 points, 6.1 rebounds, and 3.9 assists per game. Graves is Buffalo’s floor general having one triple-double and just one assist short of another this season. 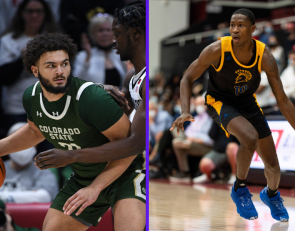