Nick Starkle had a record-setting day.

This Mountain West title game first half was a low-scoring affair despite that Boise State and San Jose State combined for 66.5 points per game.

That opening half saw a lot of defense with six total field goals and saw the Spartans leading just 19-6 and was held to four field goals as the Broncos defense held tight when San Jose State got close to the end zone.

The second half saw things cooking the San Jose State offense as they moved the ball well and ultimately winning its first-ever Mountain West title and first outright conference championship since winning the Big West in 1990. The final score was Spartans 34 and Boise State 20,

The difference in this game was the first half as San Jose State’s offense was to do just enough with those four field goals and their defense holds the Broncos to just two field goals.

One key player that was not suiting up and maybe could have made a difference was Boise State running back George Holani who has been hampered with an injury the past few weeks and did not play. He is arguably the most importan piece of this Broncos offense. Without him, the running game has been hit or miss and it was in this game as Boise State’s leading rusher was Andrew Van Buren who had only 26 yards.

The second half saw a chance for San Jose State to blow open this game as they go to the Broncos 19-yard line for a 4th-and-2 which was a running play to Tyler Nevins came up short. A field goal would have been nice but this San Jose State team wanted to assert control in this game but they came up with no points.

Getting did not cost the Spartans all that much, but it also nearly did. The San Jose State defense forced a punt and then so did the Boise State defense.

However, Avery Williams showed up in a big way with his fourth special teams touchdown of the year with a 69-yard punt return for a touchdown to make it a 19-13 game.

At that point, it seemed that the king was still alive and not going to fall away quietly into the night.

This is when the game really got interesting. San Jose State was going to have to respond to the gut punch of a special teams touchdown. They did just that by marching down the field with a nine-play, 75-yard drive touchdown drive which saw Starkel complete a 30-yard touchdown pass to Isaiah Hamilton, and then they went for two to go up by 14 points.

Going up 14 points at this point in the game with 14:17 left in the fourth seemed to put the game out of reach with the way this Spartans defense was playing all day.

Once again, the defending champs wouldn’t go down without a fight to respond with another touchdown. For some reason, San Jose State kicked to Williams again and he gave Boise State great field position on his 33-yard return. The score was a 2-yard run by Boise State quarterback Hank Bachmeier to make it a one-score game at 27-20.

A seven-point game with 10:51 left in the fourth quarter saw both defenses tighten things up as both teams were forced to punt on consecutive drives.

The game-icing score came when the Spartans got the ball back after forcing a three-and-out that saw Boise State only move the ball two yards and got the ball on the Broncos 42-yard line. The first play was huge for Boise State as Isaiah Bagnah had an 8-yard sack. That was not enough as Starkel then went on to complete all three of his passes and the final was a 1-yard toss to Derrick Deese Jr.

Going up 14 with 3:48 left in the fourth quarter was enough for San Jose State to defeat Boise State and win its first outright conference title since 1990.

The win puts San Jose State in the Arizona Bowl and likely against MAC champion Ball State. Boise State will be in a bowl game but the location is to be determined. 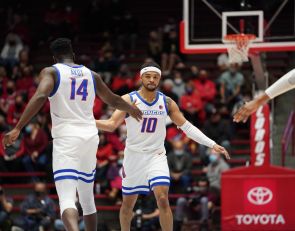