Like everything in 2020, the Maui Invitational will look a lot different than what we are used to seeing.

Every year, a select few teams are chosen to receive the bonus of a Hawai’ian holiday, courtesy of the Maui Jim Maui Invitational. The annual event is usually hosted by Division II school Chaminade, which is located in Honolulu. This year, however, the event has been moved to Asheville, N.C., in response to the ongoing COVID-19 pandemic, and the fan-favorite Silverswords will sadly not be making the trip.

Still, while the event may have lost some of its island flair, this is an impressive field that promises to deliver some high-quality basketball starting on the first Monday of the new season.

Here’s a look at the details, the bracket, and the field ahead of next week’s Maui Invitational. 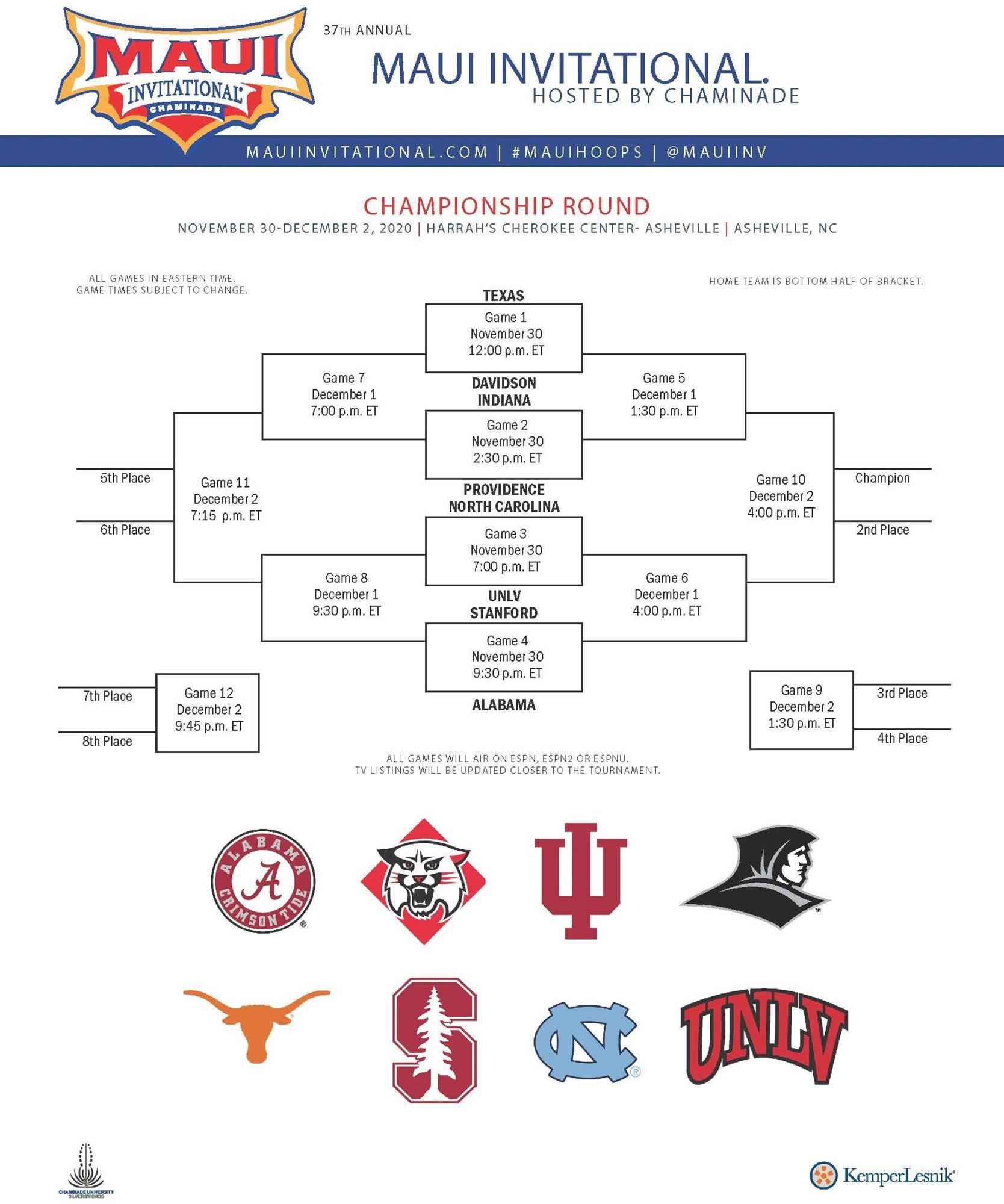 This year’s installment of the Maui Invitational features an eight-team bracket made up mostly of programs from “Power 5” conferences, including two teams that were featured in the preseason Top 25 national polls. Below is a quick preview of each team, including how their first week has gone so far.

(NOTE: Records and rankings current as of November 28.)

The Tar Heels are easily the most storied program in the “Maui” field, and as the highest-ranking team coming into the event, it should be no surprise that they are the presumptive favorites. Freshmen Caleb Love and Day’Ron Sharpe starred in the Heels’ opening-day win over College of Charleston, but the main attraction on this team is senior big man Garrison Brooks, who was an All-ACC selection and the league’s Most Improved Player last year.

Though they came into the season with high expectations, the Rebels came out completely flat in their opener against Montana State, being run out of their own home gym in a buy game. Still, this team has plenty of weapons, including preseason All-MW choice Bryce Hamilton and preseason MW Newcomer of the Year David Jenkins. Things got off to a very rocky start, but TJ Otzelberger could win back some good will with a massive upset.

Ziaire Williams. Trust me, you are gonna LOVE this kid. Both on and off the court. https://t.co/2UBIWVBnH8

Head coach Jerod Haase returns four starters from a Stanford team that won 20 games last season and finished in the middle of the Pac-12. Most important among those returners are Oscar da Silva and Daejon Davis. The pair form a thunder-and-lightning tandem for the Cardinal, but the most exciting piece on this team may be Top 10 freshman Ziaire Williams. The event could be a coming-out party for the explosive young wing.

It may still be football season in Tuscaloosa, but head coach Nate Oats could start siphoning off some of that attention if he can get this Tide team playing up to its potential. In the frontcourt, Alabama returns All-SEC forward John Petty and SEC All-Defense selection Herb Jones, while the backcourt features SEC All-Freshman in Jaden Shackleford and a former prized recruit in Jahvon Quinerly. The Tide got off to a good start, cruising past Jacksonville State, 81-57.

The Hoosiers are led by a potential All-American in Trayce Jackson-Davis, who is already looking like he is in midseason form. TJD opened the 2020-21 campaign with a 26-point, 11-rebound performance in Indiana’s 89-59 win over Tennessee Tech. In addition to Jackson-Davis, head coach Archie Miller will look to veterans Rob Phinisee, Aljami Durham, and Joey Brunk. The Hoosiers opened the year just outside the Top 25, but they may not stay there for long.

Picked to finish third in the massively-talented Big East, the Friars promise to be a dangerous opponent and a difficult out in the Maui Invitational. Veteran head coach Ed Cooley looks to lean on a core of returning players in Nate Watson, David Duke, and A.J. Reeves. One of the most intriguing pieces, though, is newcomer Noah Horchler (16 PPG, 9 RPG at North Florida in 2018-19). Providence annihilated Fairfield in its opener, beating the Stags by 41 points.

Hoping to bounce back after a disappointing 2019-20 season, Davidson faces long odds to win the Maui Invitational event. Still, their ability to pull an upset or two shouldn’t be discounted, because there is talent on this team. That talent starts with Kellan Grady, a likely All-A10 pick who is an absolute handful for opposing defenders. Another name to know is Hyunjung Lee, who dropped 23 points and nine assists in the Wildcats’ 82-73 win over High Point.

Is Texas back? They just might be, as star freshman Greg Brown turned heads in his debut for the Longhorns. The long, athletic forward was a Top 10 recruit in the Class of 2020, and he had a double-double (11 points, 10 rebounds) in Texas’ 91-55 win over UTRGV. Head coach Shaka Smart also has a number of veteran guards at his disposal, including senior Matt Coleman and junior Courtney Ramey. A strong showing in Maui could quell calls for Smart’s job.

While we’re here, here’s how I see the event playing out:

Under this scenario, Roy Williams and the Tar Heels would be hoisting the Maui Invitational hardware, with the final order of finish as follows:

Have a different idea for how the Maui Invitational will go down? Connect with us on Twitter at @MWCwire and @andrewdieckhoff, and let us know what your predictions look like!

Andrew Dieckhoff is a USBWA member writing about college basketball for Mountain West Wire of the USA TODAY Sports Media Group and The DPI Gradebook presented by Heat Check CBB. Andy is a returned Peace Corps Volunteer and a graduate of Portland State University. He currently resides in Portland, Oregon.