Alston was held scoreless in the loss.

The first game of the season was a disappointing one as the Broncos fall 68-58 to Houston on the road. RayJ Dennis led the Broncos with 18 points, Marcus Shaver had 16, and Mladen Armus had 11 points. For the Cougars, Quentin Grimes had 25 points.

Arizona transfer Emmanuel Akot was possibly going to start at point guard rather than Marcus Shaver. Still, it was announced shortly before the game that Akot was out due to contact tracing after being nearby a positive person for COVID-19, so it made Leon Rice’s crew short-handed early on.

The biggest issue is that Derrick Alston Jr, the leading scorer last season for Boise and the preseason conference player of the year, had zero points. It’s impressive that it was this close with Alston not scoring; Alston went 0-6 from the field.

and they cover the 13-point spread.

Plenty not to like, but it wasn't nearly as bad as some are making it out to be.

Another huge issue is that Boise got out-rebounded by an astonishing 23 rebounds, 49 to 26. Houston grabbed 15 offensive rebounds; the Broncos struggled to haul in misses from their bigs, Kigab and Armus.

ONE THREE POINTER. Boise State made one three, and it was by Max Rice (Leon’s son). They missed all the other 14 they attempted. If you get out-rebounded by nearly double and only hit one three, that will not lead to many victories.

Derrick Alston will score more than zero points in likely every other game this season, for a guy that scored 17-a-game last year will no doubt score.

RayJ Dennis looked tremendous, scoring 18 on 8-13 shooting. One of the top breakout candidates in the conference showed on full display why that’s the case. Dennis will continue to play a significant role as a combo-guard alongside either Shaver or Akot.

Akot will be back. Best wishes to Emmanuel, and hopefully, he doesn’t have COVID, first and foremost, as he missed today due to contact tracing. The 6’7 versatile guard will play a massive role and played a lot of point guard in practice. Once Akot’s back in the fold, the offense should run more smoothly.

Boise (0-1) is facing Sam Houston State (0-2) on Sunday, in what should be a get-right game for the Broncos. The preview for that will be up in the coming days. 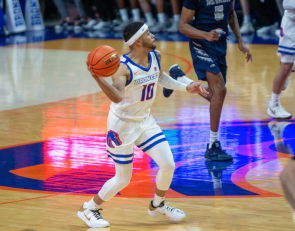 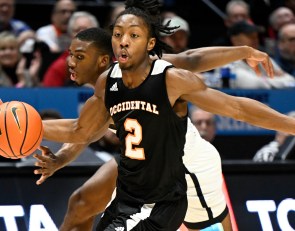