A home-and-home series between the Utah Utes and Wyoming Cowboys, which was initially supposed to begin this season, has been rescheduled for 2025 and 2027.

A lot has had to change this year. Lives have been put on hold, travel plans have had to been canceled, and sports have had to either postpone seasons or reschedule entirely. Wyoming’s renewed series with once fierce rival Utah was a game that many had been looking forward to for this season, was one such causality of that, coronavirus caused, rescheduling.

Besides Colorado State, and possibly BYU, Utah has, historically, been one of Wyoming’s most bitter rivals. During the Utes rise to national prominence, they would steamroll the pokes, causing even the most affable of coaches to become hostile.

It was in 2007 when Joe Glenn infamously raised a middle finger in the direction of the Utah sideline after they had just kicked an onside kick, in a game that they eventually won 50-0.

It was out of character for Glenn to respond in that manner, but it shows what can happen when rivals meet. This time around, after not playing each other for over a decade, tempers won’t be as high, but from a fan’s perspective, it will be nice to relive some of those memories from the past.

Five years is a long way away, but it’s nice to have something to look forward to in the post-pandemic world. 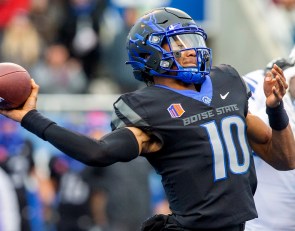