The Rebels finally get their chance to start a new era, but their new schedule could be rough.

Is it still Year Zero?

In a lot of ways, the UNLV Rebels were going to start over in 2020 no matter when it began. New head coach, new home digs, and renewed optimism became anchors to project a bright future despite what would have been a very challenging present and, now that the proverbial deck has been reshuffled, Marcus Arroyo and company may still have to wrestle with a pretty bad beat right away.

Here’s what the week-by-week schedule looks like with the most recent SP+ rankings from September 27, where UNLV is 122nd overall, in parentheses:

What are the biggest initial takeaways?

As Nevada Sports Net’s Chris Murray pointed out, UNLV is the only team in the Mountain West to draw the top six teams in the conference by the aforementioned SP+ measure. Taken in tandem with the fact that, at least for now, the Rebels’ performances are projected to be last by that same metric, it’s likely there will be some bumps and bruises along the way.

2. The best chance to make hay is early.

Despite the larger picture, it seems pretty clear that the Rebels’ best chances to earn a win or two will come in the first half of this schedule. The three California schools — San Diego State, Fresno State, and San Jose State — are all ramping up under unusual circumstances and, if they come out of the gate a little out of sorts, UNLV could reasonably steal a win or two. The fourth game, a home date with rival Nevada (on Nevada Day, no less), seems always to be a toss-up regardless of the perceived talent gap, too. Arroyo could ingratiate himself pretty easily if he keeps the Fremont Cannon red while taking his lumps elsewhere across the Mountain West.

Other fanbases across the conference have already made jokes about how rough it could be to attend or play in December in locales like Laramie and Boise but, after the November 21 trip to Fort Collins, UNLV should be able to either play in a controlled environment (Allegiant Stadium) or, at worst, in relatively balmy conditions at Sam Boyd Stadium and in Honolulu. If they show signs of improvement throughout the fall, at least they can count on avoiding the wrench that the elements can sometimes toss in.

Hardest stretch: vs. Wyoming, vs. Boise State, at Hawaii

Worse than 50/50 games: at Colorado State, at Hawaii, vs. Nevada, at San Diego State, vs. Wyoming 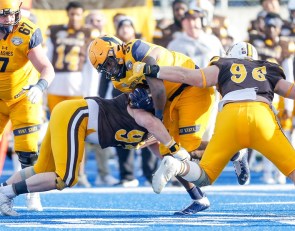