Great work by the former Bronco.

Matt Paradis has come a long way since his days at Albertsons Stadium.

The former Boise State standout now finds himself entering his seventh season in the NFL and his second campaign as the Carolina Panthers starting center.

The native Idahoan arrived at Boise State in 2008 following a standout prep career for the Council High School Lumberjacks. Paradis excelled on the gridiron under Council coach Dan Shumway as a guard and defensive tackle.

Reaching 6-foot-3 and 245 pounds as a senior, Paradis was an imposing force during his days with the Lumberjacks. He finished out his prep career with 99 solo tackles, 23 sacks, and two fumble recoveries in 31 games.

The 2007-08 Lumberjacks went 10-1 in Paradis’s senior season. MaxPreps ranked the squad as the second-best in Idaho and 22nd overall in the country in its 6/8/9-Man rankings for the year. Paradis received the Idaho 1A High School Player of the Year in 2008.

After graduation, Paradis shifted his talents 125 miles south of Council down to Boise State.

Former Broncos coach Chris Petersen deployed Paradis on offense during his redshirt freshman year in 2010. Paradis saw his first college game action on the O-line in a game against Toledo on October 9.

In 2011, Paradis was one of three Broncos to start at center, including his first career start against Tulsa on September 24. He appeared in eight games as a sophomore and helped Boise State’s O-line to a first-national ranking in sacks allowed (0.62 per game).

Paradis found his permanent home as a junior in 2012 when he started each of the Broncos 13 games at center. Boise State went 11-2 on the year en route to a post-season win over Washington in the Las Vegas Bowl. The occasion marked the Broncos third consecutive Las Vegas Bowl victory. For his part, Paradis was named to the first-team All-Mountain West squad.

Boise State’s record dropped to 8-5 in 2013, Paradis’s senior year. Still, the center turned in a fine performance and served as the team captain for four games. He closed out his Broncos career starting in all 13 games and earned a second first-team All-Mountain West nod.

Paradis’s NFL journey began when the Denver Broncos selected him in the sixth round (204th overall) of the 2014 draft. He was eventually waived after training camp and landed a spot on the Broncos practice squad.

The center position in Denver was up for grabs ahead of the 2015 season with the departures of Will Montgomery and Manny Ramirez. Paradis delivered an excellent training camp performance and secured the spot, starting his first professional game in a 19-13 win over the Baltimore Ravens on September 13.

Paradis went on to start all 16 games for the Broncos as the play setter for Peyton Manning in the future Hall-of-Famer’s final season. The Denver 12-4 squad breezed through the playoffs and toppled the Carolina Panthers in Super Bowl 50 on February 7, 2016.

Paradis spent three more outstanding seasons as the starting center in Denver. He was ranked the second-best center by Pro Football Focus in 2016 and 2018.

In March 2019, Paradis inked a three-year, $27 million deal to join the Panthers, a move that lined him up with Cam Newton. The newly southernized center started all 16 regular season games in his first Carolina campaign.

Paradis gets a new quarterback in 2021 as Teddy Bridgewater replaces Newton under center in Carolina. Despite dropping their first two contests to the Raiders and Buccaneers, Panthers fans are hopeful the duo can work together to drive the team into the playoffs, bolster Carolina’s NFL betting odds at sportsbooks, and rack up valuable points for fantasy managers.

Paradis has proved his ability to change and thrive throughout every level of his career. In the process, the former Mountain West star has established himself as one of the finest centers in the game, capable of working with big name quarterbacks.

Not a bad story for a guy from the small town of Council, Idaho. 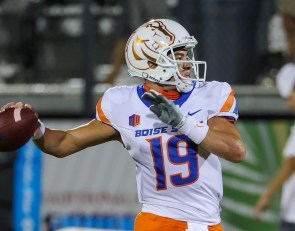