2020 NBA Mock Draft: Could Malachi Flynn Be A First-Rounder?

2020 NBA Mock Draft: Could Malachi Flynn Be A First-Rounder?

The Draft lottery has been set, and with it a flurry of new mock drafts and updated big boards. Here is an update on where Mountain West Players are projected to go.

Malachi Flynn: Flynn is the only Mountain West player who seems like a lock to get drafted somewhere. Teams love his winning pedigree, his ability in the pick and roll, and his 3 point range. The main concerns are his level of athleticism and size. Most places have him listed as an early second rounder, but it’s not hard to imagine a team in need of a point guard taking him in the late first.

Joining us for an ESPN Film Session tomorrow will be Mountain West Player of the Year, Malachi Flynn. The SDSU PG played himself onto NBA Draft boards this season by averaging 17.9 PTS and 5.0 AST as the leader of the 29-2 Aztecs. Polished PnR guard. Should be a fun one. pic.twitter.com/oHuLEkRJfk

Tankathon.com – 48th to Warriors, 41st on the big board

Linups.com – outside 1st round, listed as a top sleeper

Model comprised of dozens of boards/mocks weighted based on date, level of intel, scouting experience, depth of analysis, etc.

Who are you higher/lower on than consensus, and why? 📈📉 pic.twitter.com/18Qa2SQjog

Sam Merrill: Merrill has been gaining some traction lately and moving into people’s second rounds. Merrill can be a shot maker and even run a little offense. He also has a lot of experience and that could help him contribute earlier. The concerns are his defense, level of athleticism, and that he has already reached his ceiling.

Politics and hype aside Sam Merrill is one of the best guards in the draft @RP3natural. pic.twitter.com/Q7GbJYCcsa

NBA Draft Room – 75th on the big board

Linups.com – outside 1st round, listed as a top sleeper

The Ringer – 41st on their big board

Jalen Harris: Jalen Harris was in more mock drafts earlier in the year, but has fallen out lately. It only takes one team to make the decision though. He has good size, decent athleticism, can score well from all levels and can create for others as well. Harris will likely get a training camp invite if he’s not picked toward the end of the second round.

Justinian Jessup: Jessup is likely too one dimensional to make an NBA roster. He’s a great shooter and has good height and length, but isn’t seen as a good enough defender to contribute at an NBA level.

NBA Draft Room – 90th on their big board 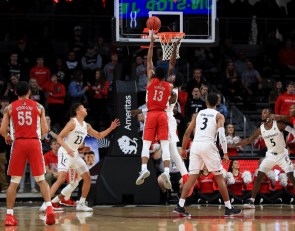