Can the Rams offense take that next step?

The Colorado State Rams offense in 2019 looked like they were going to get back to the offensive juggernaut days of Mike Bobo’s early tenure at CSU. Marvin Kinsey was dismissed from the program mid way through the season and the offense took a big step backwards as the running game was never the same.

Out went Mike Bobo and in came Steve Addazio. The big question Rams’ fans will have is will CSU become a ground and pound team. “That’s a building block to winning a championship…You have to have the ability to run the football,” Addazio said in his introductory press conference. He later clarified that he is oriented towards the talent he has on the roster as a coach.

Now lets breakdown the talent Addazio and Offensive Coordinator Joey Lynch will have at their disposal.

Incumbent starter Patrick O’Brien was thrust into the starting lineup when Collin Hill tore his ACL against Arkansas. O’Brien finished 2019 completing 62% of his passes for 2,803 yards, 13 touchdowns, and seven interceptions. His biggest strength was his arm strength. O’Brien could throw the deep ball or throw a fastball through a tight window.

O’Brien’s biggest weakness last season was his pocket presence. The biggest example of this was O’Brien being sacked eight times against Air Force. He had a tendency to step up into pressure instead of away from pressure.

With the departure of Collin Hill (South Carolina) and Judd Erickson (transferred out), the Rams were left with only one scholarship QB in Justice McCoy. McCoy was given multiple opportunities to stake his claim on the depth chart, but could never really make his mark as he struggled to grasp Bobo’s playbook.

This led Addazio to recruit Todd Centeio as a graduate transfer. Centeio in backup duty for Temple last year completed 34 of 51 passes for 444 yards and five touchdowns. He also added 155 yards on 47 rushing attempts. Centeio is more a dual-threat quarterback to O’Brien’s pocket passer, but could still find his way onto the field in special packages for the Rams.

Marcus McElroy is the Rams leading returning rusher with 80 carries for 370 yards and three touchdowns in 2019. McElroy struggled with injuries in the early part of 2019 and never really produced when he became healthy.

McElroy is a big running back at 5’11”, 230 lbs. He also has speed on the outside. He likes to be more of a speed guy, but he needs to run between the tackles more for the Rams to be successful.

Next on the depth chart would be Jaylen Thomas and Christian Hunter. Coming out of fall camp, Hunter was expected to play a bigger part in the Rams offense, but it was Thomas who grabbed the reigns throughout the season. Thomas finished with 68 carries for 222 yards and three touchdowns, to go along with 14 receptions for 113 yards.

Don’t count out redshirt freshman Tyreese Jackson or true freshman Kyjuan Herndon. Both had great prep careers, with Herndon rushing for 1,836 yards and 15 touchdowns his senior year. The Rams have talent at the running back position, however, it remains to be seen if they can take advantage of that talent. 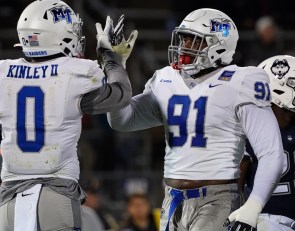