Previewing The Wolf Pack Offense In 2020

The Nevada Wolf Pack are headed into the 2020 season looking to improve on their 7-6 record in 2019. Last season, Nevada did have their moments where they struggled and looked bad such as the games against Oregon and Hawaii. However, the Wolf Pack did improve late in the season and notch impressive road wins over San Diego State and Fresno State to become bowl eligible.

This year, the Wolf Pack are welcoming back some talented players who are looking to take that next step and compete for a Mountain West conference championship. And in the Western division of the Mountain West where four of the six teams are breaking in new head coaches, this could be the year Nevada breaks through and wins the West division.

In this article, I will be previewing the Nevada offense as they look to have the talent to win the West division and play for a Mountain West championship in 2020.

Heading into the 2019 season, the Wolf Pack were dealing with a quarterback conundrum as they were searching to see who would be the starting quarterback to replace Ty Gangi who had graduated.

Strong did start the season opener against Purdue and was excellent throwing for 295 yards and three touchdowns in the win over the Boilermakers. However, Strong struggled in his next three games against Oregon, Weber State and Hawaii as he threw five interceptions and zero touchdowns,

After not starting for two games due to injury, Strong came back to start but struggled once again in a loss to Wyoming. But after that Wyoming game, Strong played well down the stretch as he threw eight touchdown passes and only one interception  as Nevada won three of their last five games to become bowl eligible.

In the upset victory on the road over San Diego State, Strong had a fine outing going 19 of 26 passing for 147 yards and a touchdown in the win over the Aztecs. Strong had a solid freshman year but needs to continue his stellar play in order for the Wolf Pack to compete for a conference title in 2020.

In the running back department, the Wolf Pack welcome back a pair of hard-hitting runners in sophomores Toa Taua and Devontae Lee. In 2019 Taua ran for 807 yards and scored six rushing touchdowns last year and while the numbers are fine, it was a step down from his freshman campaign.

Taua’s 2019 rushing numbers were down from his sensational freshman campaign in 2018 where he ran for 872 yards and his average yards per attempt was 4.9 yards. In 2019 Taua’s rushing yards per attempt went down to 4.1. Taua is still one of the talented running backs in the Mountain West but he needs to return to his performance as a freshman in order for Nevada to take that leap forward.

Backing Taua up at running back is fellow sophomore Devontae Lee. Lee is a wrecking ball with legs when he is carrying the football. Lee ran for 302 yards and led the team in rushing touchdowns with seven in 2019. Lee, unlike Taua, saw his yards per attempt go up in 2019 as he went from 4.2 yards per carry in 2018 to 4.5 yards per carry in 2019.

Taua and Lee are a running back tandem that has the makings of being one of the best in the Mountain West. Two questions that need to be answered is can Taua bounce back from a disappointing sophomore season and who will be the third running back for Nevada?

With Jaxson Kincade transferring to Western Michigan, the Wolf Pack will need to find a third running back to step up and time will tell if Avery Morrow, Terrell Johnson or Wes Kommer can step in and be that third running back.

The Nevada wide receiver group in my opinion is the best unit in the Mountain West conference heading into the 2020 season. And the two stars of that receiver group are Elijah Cooks and Romeo Doubs. In 2019 Cooks caught 76 passes for 926 yards and eight touchdowns while Doubs caught 44 passes for 649 yards and four touchdowns.

Some other interesting stats courtesy of the 2020 Nevada football preview podcast by Jeremy Mauss and Matt Kenerly, is that in 2019, both Doubs and Cooks combined for 24 catches of 20 yards or more. Also after November 1st of 2019, Cooks averaged eight catches and 100 yards per game for Nevada.

Cooks and Doubs (who missed the last two games due to injury) make up a very talented wide receiver duo that gives Nevada more than a good chance of winning the West division in 2019.

The key now is for Nevada’s AirWolf offense to find a third, fourth and fifth receiver to really get the offense going. Look for returning receivers Melquan Stovall and Cole Turner along with true freshmen receivers Jamaal Ball and Issac Jernigan to compete for starting time.

No matter how talented the Wolf Pack skill position players are, their talent can’t be utilized to achieve maximum success without a solid, functional offensive line.

In 2019, the Wolf Pack offensive line was a mostly inconsistent unit and that inconsistency was heightened when left tackle Jake Nelson missed the remainder of the season with an injury. The Wolf Pack offense had difficulty protecting the quarterback as they gave up 33 sacks in 2019 which placed them last in the Mountain West in that category.

When it came to establishing the running attack, the Wolf Pack struggled in that department in 2019 as well. Per the advanced stats, the Wolf Pack were 120th and 122nd in line yards per carry and opportunity rate, respectively.

Heading into the 2020 season (assuming the season starts and ends on time) the Wolf Pack on paper are one of the most interesting teams in the Mountain West. On the offensive side of the ball they have the talent at the skills position to compete with Hawaii and San Diego State for a division title.

But the running game and the offensive line must improve from a lackluster 2019 for the Wolf Pack to take that next step and  play for a Mountain West title. Carson Strong has the tools to be one of the best quarterbacks in the conference but he must continue his excellent play from late last season when he threw eight touchdowns and one interception.

If the offensive line and running game get back to the great play from 2018 and Strong and those receivers play well, you could see the Wolf Pack play for a chance to win the Mountain West conference in 2020.

Boise State vs. San Jose State Is Off Due To COVID-19 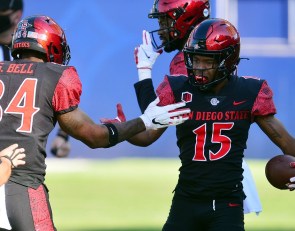 Mountain West Football: Week 13 Winners and Losers Who came out ahead and who left something to be desired in the last three days of (…)

San Jose State Athletics Must Pause On-Campus Contact Sports Through Dec. 21 Spartans may need to find a new home or be creative to (…)

Boise State Looks To Bounce Back vs. Sam Houston State

Boise State Looks To Bounce Back vs. Sam Houston State Broncos looking to get first win of the year. Contact/Follow (…)

Hawaii vs. Nevada: How To Watch, Livestream, Odds, More Get the app to watch this game. Contact/Follow @JeremyMauss (…)

Boise State vs. San Jose State Is Off Due To COVID-19

Boise State vs. San Jose State Is Postponed Due To COVID-19 Broncos vs. Spartans is off. Contact/Follow (…)

#16 UNC, #19 Texas highlight a high-profile Maui field Like everything in 2020, the Maui Invitational will look a lot different (…)

San Jose State vs. Boise State: How To Watch, Game Odds, Livestream, More Biggest game ever for the Spartans? (…)

SDSU vs. Colorado Contingency Game: How To Watch And Keys To An Aztecs Win

SDSU vs. Colorado Contingency Game: How To Watch And Keys To An Aztecs Win Buffaloes and Aztecs schedule last minute game (…)

Boise State Looks To Bounce Back vs. Sam Houston State