The race to the Mountain West football title looks wide open in 2020. How do we predict things will unfold?

Who will come out on top?

For the second time in three years, our staff here at Mountain West Wire predicts that the San Diego State Aztecs and Boise State Broncos will meet for the conference championship.

These picks were made under the assumption that the Mountain West will find a way to play its complete conference schedule as currently constructed. Given the uncertainty of the pandemic’s ultimate impact on the college football season, that is obviously subject to change but, without further ado, here’s what we think:

How competitive will the West division really be this fall? After stumbling at the finish line in 2019, our staff appears to think that the Aztecs will find a way this time to make good on bringing another division title to the Mesa. It also looks like there’s a healthy dose of skepticism regarding San Jose State and their improvements last fall, as the Spartans were voted either fifth or sixth in all but one ballot.

The Broncos are once again our collective pick to win the Mountain division but, again, they aren’t a unanimous choice to do so. That speaks to the annual competitiveness of their regional foes, which is such that we’re optimistic about Wyoming even after losing a pair of NFL-caliber linebackers (and then some) and even the possibility of losing Donald Hammond III doesn’t dampen Air Force’s title hopes completely. 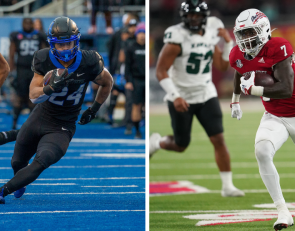