A shortened college football season could take on a number of different looks.

The possibilities really are endless.

As we head toward the summer without a clear resolution as to whether college football will return on time (or at all) for the 2020 season, conjecture about what form that season could ultimately take continues to run rampant. Athletic departments across the country are already turning over every last rock in the likelihood that something about the campaign will be different.

So what could the season look like? We take a closer look at some hypothetical scenarios and try to answer some questions that a short season would pose.

Note: There’s no clear resolution right now as to how programs across the country will revise their non-conference schedules in the event of a truncated season so, for the purpose of this exercise, distance between teams was the primary factor in determining which games were kept on each hypothetical slate.

How are western states dealing with the pandemic right now and what is their outlook for the future?

The responses to the coronavirus pandemic have varied from state to state. Utah and Wyoming never issued a statewide “shelter in place” order, though partial measures were taken on a more localized level. Other states like California are in the earliest stages of a re-opening strategy. The overall picture appears to be one in which the onus for maintaining public health will fall to businesses eager to get back open.

However, most state leaders have generally been lukewarm, at best, about a return to normalcy that includes large-scale events like college football. California governor Gavin Newsom believes that a vaccine will probably be necessary for the security of such things and Oregon’s Kate Brown echoed similar sentiments, while Utah’s Gary Herbert recently issued an order that enables recreational activities so long as participants remain ten feet apart. New Mexico’s Michelle Lujan Grisham listed modified spectator sporting events among the things that could possibly come back in the state’s third re-opening phase. Idaho’s Brad Little has given youth sports leagues the opportunity to come back by mid-May.

What does that all mean? It appears some states are approaching the re-opening process with guarded optimism, while others are willing to be conservative in the face of so much uncertainty. Washington governor Jay Inslee put it best when, in an interview on KJR 590 a few weeks ago, he expressed confidence that football would return but noted that “the virus gets a vote on [it], and we’ve got to make decisions to save lives.”

Who could be impacted the most if traveling long distances is a risk?

There are a few answers with pretty convincing arguments. Hawaii doesn’t have any east coast trips on their docket this fall, but they have five games against California schools. Boise State’s non-conference home games with Georgia Southern and Florida State would be tough to replace. Paycheck games like San Jose State/Penn State and Fresno State/Texas A&M probably couldn’t be replicated to the same degree. Depending on your loyalties and priorities, your mileage will vary as to who will have it roughest.

How would the conference deal with its multiple games against BYU and New Mexico State?

The Mountain West is supposed to have three games each against the Cougars and Aggies in 2020, but how much of that will hold remains to be seen. BYU’s trip to San Diego State in mid-November is the one with the most uncertainty at the moment because of the distance, while the Aggies are supposed to face both Fresno State and Hawaii on the road in back-to-back weeks in October.

State-level decisions would appear to be the deciding factor, so the most conservative scenarios would probably amount to hefty restructuring on NMSU’s part since, well, Las Cruces isn’t as centrally located as Provo. Would New Mexico partake in a home-and-home, perhaps?

What happens to FBS vs. FCS games in a short season?

Right now, no one knows for sure, but Dan Patrick touched upon this recently when referring to conversations he’s had with individuals across the college football landscape:

DP got some information in regards to College Football last night.. If things progress at the predicted curve it the consensus we'll have a 10 game CFB schedule with a later start to the season.

In the event that travel needs to be scaled back, however, abandoning the FCS may not be such a great idea. Many people have talked up a revised, limited Mountain West/Pac-12 non-conference slate, but the Big Sky could play just as important a role for having a full season. For teams in the Mountain division, the Big 12 could also see some openings if teams from the east coast are discouraged from making their scheduled trips.

What happens to the Hawaii exemption in a short season?

Of the seven teams that are supposed to visit Aloha Stadium this fall, only the New Mexico Lobos elected to add a thirteenth game to their schedule. For a team looking set to rebuild, losing a winning early game to restructured scheduling would be a tough pill to swallow. Assuming a greater degree of regional play in making cuts, it seems most likely that Mississippi State and Massachusetts would get removed.

That leaves three teams for two potential OOC spots in a ten-game schedule. The Rio Grande Rivalry with New Mexico State would occupy one spot, while maintaining their road trip to USC would definitely pay some bills.

As for Hawaii themselves, choosing two out of the most likely three is much tougher because the Warriors face three Pac-12 opponents. It seems reasonable to suggest they’d be reluctant to give up their home game with UCLA, but choosing between a road trip to Oregon or a trip to Arizona would have ripple effects across non-conference revisions.

What happens to the Commander-in-Chief’s Trophy round robin?

The Falcons are set to do a fair bit of traveling throughout their OOC schedule, which poses a problem with increased regionalism in mind. Could they schedule Colorado again if the Buffaloes are forced to scrap their home game with Fresno State? Could they host another FCS team closer to Colorado Springs if Duquesne, traveling from Pittsburgh, can’t go, or make a road trip if heading to Purdue isn’t possible?

It could go in any number of directions, but it’s difficult to see an exception being made for the academies. 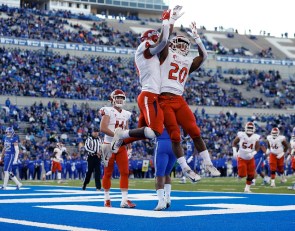 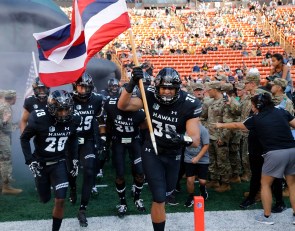 Fresno State vs. Nevada Preview: Keys For A Bulldogs Victory Bulldogs are finally back on the field. (…)

Rebels face Davidson; Heels and Longhorns tangle in title game As the Maui Invitational comes to a close, UNLV is still eyeing its first (…)

Nevada vs. San Francisco: Preview, How To Watch, Odds, More

UNLV shooters start to warm up, but fade down the stretch For the second night in a row, a hot start for UNLV was followed by a letdown. (…)

Off to Aggie Territory (in Utah) Are the Falcons Looking ahead to Army? Contact/Follow @Sean or @MWCWire WEEK (…)

Nevada vs. Pacific Preview: How to watch, odds, prediction

Boise State vs. UNLV: Three Keys To A Rebels Win