A Way-Too-Early Look At The Fresno State Bulldogs

Year three of Justin Hutson’s time in Fresno builds on a solid foundation.

Players have already accepted reality and have begun taking the next step in their careers as of Friday. For some that is beginning NBA draft preparations a little earlier than expected, for others it is finishing their remaining course loads online to better gear up for next semester. Though the last group of players it is looking for their next opportunity and entering the transfer portal.

After sporting leagues around the globe either canceled or postponed their seasons in wake of the COVID-19 pandemic, the NCAA followed suit by outright canceling scheduled spring sports but rewarding seniors another year of eligibility to return and compete next season. This was a swift and just decision in a time of uncertainty for a lot of student-athletes, but there was still a group left in with uncertainty.

Winter sport athletes have currently been left with hope, given a ruling from the NCAA that would grant them any sort of extra eligibility given their abrupt cancellation of the big dance. So in the spirit of pure fun we will take a look at Mountain West team’s rosters for next season. Taking a look at both scenarios, just in case the NCAA surprises us.

2020-2021 Roster: In the event seniors are granted further eligibility

New Williams and Noah Blackwell were supposed to be the next Braxton Huggins and Deshon Taylor, that may have been an unfair comparison. No one said these words exactly but the Bulldogs were picked 6th in the media’s preseason conference standings with both players mentioned above referenced in Fresno State preseason previews around the country.

It’s hard to replace the caliber of players Taylor and Huggins were at Fresno state, and that was evident on a team that went from a 3rd place finish in 2018-2019 to 7th the following season. To be fair they were predicted 6th in the preseason, so finishing one spot below that in a competitive Mountain West isn’t exactly a totally lost season in my opinion. If given another year of eligibility, the seniors expected to leave could do a lot of damage with a year this past season in bigger roles under their belt.

But in the event that the NCAA rules against awarding additional eligibility for winter sport athletes, which still seems like a possibility given how long it has taken to hear any news regarding the matter. Here is a list followed by a depth chart of the Fresno State roster given their current recruiting class and who we know has entered the transfer portal.

Next: Roster and Depth Chart 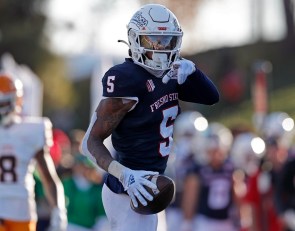