The Runnin’ Rebels visit Viejas intent to tarnish the Aztecs’ historic season, while the Aztecs seek to go 27-0 and 16-0 in league.

The Aztecs have three regular season games left, and the odds are looking better and better for a perfect 29-0 record.

San Diego, CA- The Aztecs are currently college basketball’s only unbeaten team.  No. 4 San Diego State begins its final three-game stretch of the regular season on Saturday at home against UNLV.

The Aztecs (26-0, 15-0 MWC) clinched the outright regular-season conference title last week, and did not soften their play with a 72-55 statement win at Boise State on Sunday.

“This is a hard environment to play in,” said Aztecs coach Brian Dutcher. “We’ve lost our last three (at Boise State).”

The rout continued the longest winning streak in program history, moving SDSU within three wins of an undefeated regular season.

If the Aztecs can complete the season sweep of UNLV (14-14, 9-6), they then host Colorado State before heading out to Nevada to complete the perfect run.

Should San Diego State complete the deed, as well as next month’s Mountain West Conference Tourney Championship, they would be the third program in the last six years to enter the NCAA Tournament undefeated.

The Runnin’ Rebels enter the weekend tied for fifth place with Colorado State, both with three games left to play. They are a game-and-a-half behind current second-place Utah State.

Finishing in the top five of the conference gets UNLV a bye into the quarterfinals in the Mountain West Tournament. Finishing sixth or worse means playing in the first round.

WHERE: Viejas Arena at Aztec Bowl in San Diego, CA

ALL-TIME RECORD: San Diego State leads the all-time series with UNLV for the first time since 1967 at 37-36.  The Aztecs have won 16 of the last 17 games between the teams, and at home SDSU has won the last six encounters. 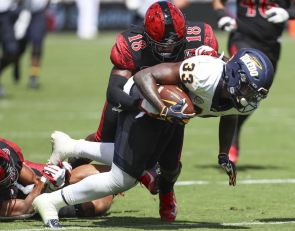