Instead of celebrating, Aztecs reflect on the sudden tragic loss of NBA great Kobe Bryant, daughter Gianna and seven others.

Las Vegas, NV-  Oh dear God. Kobe Bryant, his daughter Gianna and seven other souls were killed in a helicopter crash this morning.  The news seems too unbelievable to be true, but so sadly it is real.

It also eclipsed the Aztecs’ 71-67 victory, their 21st straight victory, against UNLV.  It also overshadowed another stellar Aztecs performance by Malachi Flynn– and a breakout 18-point off-the-bench contribution by Trey Pulliam.

The Runnin’ Rebels put up a wicked fight in this game, and at times appeared to be waging a major upset.  They scored the game’s first two points, before the Aztecs early on took a nine-point lead.

The first shot for the Aztecs was made by Malachi Flynn who sank a shot-clock-beating statement three pointer from the “U” in the UNLV logo at half court, easily a thirty-footer.

So here it is again: if you’re not closely guarding Malachi Flynn out to 30 feet: you are not doing your job.

The Aztecs moved easily ahead, before the Rebels retooled and closed the gap.  Going onto the half, the Aztecs led 34-28.

Things got pretty crazy when at 13:28 UNLV took a 40-38 lead.  The Thomas and Mack Center turned electric, and fans got really, really loud.

Yanni Wetzell answered back with a layup, then the Rebels scored again to lead again before Flynn hit a clutch 3 pointer.  Bryce Hamilton answered with a triple of his own.

Flynn then made an impossible layup, followed by the ball changing hands with a turnover on each side.  Then Wetzell made a layup and got fouled, and made his third point.  Trey Pulliam was then fouled and at 7:26 he helped the Aztecs regain the lead making two free throws.

Pulliam then hit a 3 pointer.  Jordan Schakel was then called for fouling Dmitri Mitrou Long despite being a foot away from him.  Mitrou Long went 2 of 3, making it  47-50.  Flynn then made a hard-pressed teardrop- and one- adding for 3 points making it 53-47.  Hardy then lost the ball, and fouled KJ Feagin.

Hamilton hit a 3 pointer, followed by Hardy getting a steal and feeding the ball to Marvin Coleman for dunk. Schakel and Flynn then each managed a layup, the second involving Flynn getting fouled.  After going 1 for 2 it was  60-52.

Trey Pulliam fouled Mitrou Long who went 1-2.  Shackel answered back with a 3 for a 53-63 lead.  Coleman answered with a 3 pointer.  Wetzell missed a layup and the Rebels got the board and made 2.

Trey Pulliam then made a crazy up and under layup.  UNLV then turned it over with a travel. Aztecs get the ball back with 32 seconds.  Rebels stole the ball from Flynn, and somehow drew a foul to make it 60-65.

Flynn was fouled on his inbound and made 1-2.  Pulliam was then fouled by Coleman.  Pulliam went 1-2 to make it  67-60.  The Rebels made a quick layup, and then sent Matt Mitchell to the line.  The Rebels refused to lose, down to the last second, when UNLV sank a buzzer beater three-pointer, but still could not overcome the dominant Aztecs.

Trey Pulliam produced 18 points in 27 minutes off the bench in a breakout performance.  He might have been the game’s difference maker.

The Runnin’ Rebels fought incredibly hard to prevent the Aztecs from escaping with a win- down to the last second of the game- and nearly stole this game away.  The Rebels are unquestionably on the rise.

Nine years ago to the day in Utah BYU beat the Aztecs 71-58, snapping their 20-0 season- opening win streak.  Today the Aztecs broke through the barrier and are now in uncharted territory.

Congratulations to Brian Dutcher and the Aztecs for setting a new program record. 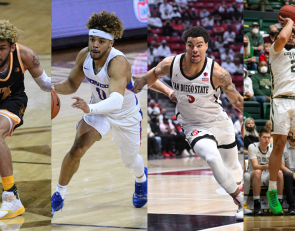 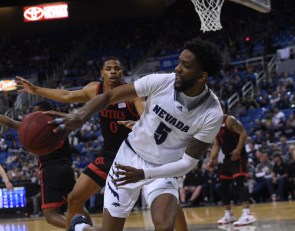 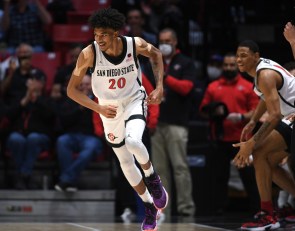 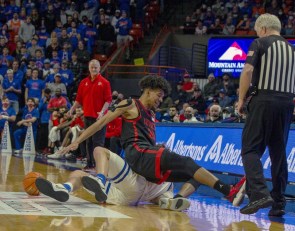 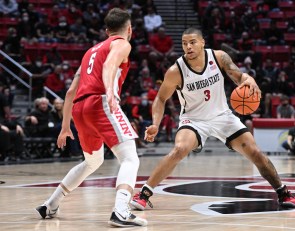