This one has a few options and this one can lead to some creativity and home games as well.

This would be a proper playoff as it is not an invitational with computers or a group of people picking the best team. This path requires every team to qualify by winning its league. This one will never happen but it would at least be earned.

Every Power Five champion, any Group of Five champion that is ranked at the end of the year in the top 25, and then fill out the rest with at-large bids.

This year there would have three Group of Five teams in Boise State, Memphis and Appalachian State and then four at-large teams. The at-large would vary each year but include teams from outside the power structure a shot if ranked and winning their league.

There would be home games for the first two rounds and being a top-four team earns a bye.

Another 12-team option is all league champions with two at-large teams. This would allow for a few other teams that are really good to have a shot at a national title plus an option for independents.

This one is my personal favorite. Go with all 10 conference champions and six at-large bids. With 16 teams it would give every conference champion to earn a spot in the field plus six other teams who most likely would be ranked probably at worst No. 12.

Colorado State WR Dante Wright Is OUT vs. Fresno State 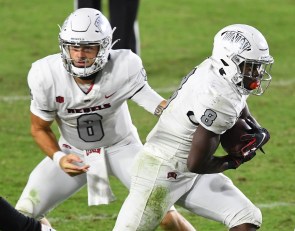 Nevada vs. UNLV: Three Keys To A Rebels Win The Rebels and Wolf Pack renew their football rivalry on Halloween. Here’s how UNLV (…)

Colorado State WR Dante Wright Is OUT vs. Fresno State

Colorado State’s Dante Wright OUT vs. Fresno State Rams will be without its top playmaker. Contact/Follow @JeremyMauss (…)

MW Basketball: Craig Thompson, Like Others Considering Conference Play In A Bubble

Mountain West Basketball: Commissioner Like Others Considering Conference Play In A Bubble With the upcoming (…)

Colorado State at Fresno State: Keys for a Rams Victory

Week 8 Mountain West Player Of The Week Of The Year