Boise State looking to start a winning streak after overtime win against BYU.

Can the Broncos make it two in a row this weekend in California against the Tigers?

PREVIEW: The Broncos are coming off of a much needed win Tuesday night against a BYU team that has been hard to read this early in the season. Tuesday night’s game went into overtime tied at 58 a piece and great penetration by Derrick Alston Jr. and big defensive plays at the top of the key by Justian Jessup sealed the win. Both players will be needed on Saturday in Stockton along with senior forward RJ Williams who is averaging a double-double (16.5 PPG and 10.0 RPG) in order to leave California with a win.

Put a ❗️ on it J! pic.twitter.com/w3aiBWalDc

Alston has been dominant in four games, averaging 25.3 PPG 6.0 RPG and 1.8 APG, and even with a supporting cast of talented scorers sometimes his efforts are not enough. Shots just weren’t falling against UC-Irvine and Oregon is looking like a top 10 team with solid wins so far and should only get better with the return of N’faly Dante come December.

Big night last night for Derrick Alston! He is the only NCAA DI player so far this season to play in at least four games and score at least 22 points in each of them.#BleedBlue pic.twitter.com/iqociKYjIz

The Broncos are going to face a Tigers team who isn’t putting up big numbers (68.9 PPG) and are winning games by small margins as of the past week. They will need to simply knock down shots and outscore the Tigers who are led in scoring by junior guard Justin Moore with 12.0 PPG followed by senior guard Jahlil Tripp with 11.7 PPG and 7.7 RPG. The Tigers match up nicely with the Broncos in terms of height. Neither teams are very tall with starting big man Amari Mccray (6-9 265) playing around four guards and RJ williams a 6-7 forward essentially doing the same, even if the Broncos do have two guards who stand above 6-6. Look for Boise State to use their height advantage in certain positions as a weapon defensively again and for Alston to have another big game.

Check out some of the highlights from the Tigers 64-60 win over Coppin State last night at the Alex G. Spanos Center. #UpRoar pic.twitter.com/voMkT25MQR 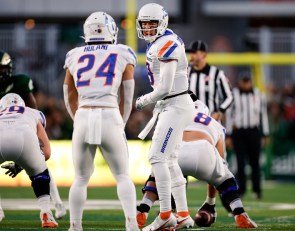