Yanni Wetzell secures the City Championship for the Aztecs.

On the west side of Mission Valley, the Aztecs conquered.

In what could be the last edition of the City Championship for the foreseeable future, San Diego State hammers University of San Diego, 66-49.

Yanni Wetzell with a career-high 20 points and a double-double.

On a night where Jordan Schakel accumulated 4 fouls and only 7 points, the Aztecs didn’t look far for a breakout performance.

Enter Yanni Wetzell, the kiwi graduate transfer from Vanderbilt who goes along with the running Wetzel’s Pretzels gag.

Yanni Wetzell with a great block to end the half! Aztecs defense has GCU tied up in knots… kinda like a pretzel.

As heard on the broadcast from former NBA player Cuttino Mobley, “Wetzell’s showing out tonight. Are there NBA scouts here?”

Wetzell in his first and only edition of the City Championship pulled off a 20-point, 12 rebound stat line. Wetzell was the better big man in the paint, grabbing 5 offensive boards and getting easy put backs against the length of USD. The Toreros’ length in Alex Floresca was called for 2 quick fouls in the first half limiting his minutes the rest of the game.

With this blowout victory for the Aztecs, the City Championship is back to being in favor of San Diego State. San Diego State never trailed and pulled away when the Toreros got within 2-points 19-17.

San Diego State shot lights out at 47.5% from the field. It’s also easy when the Wetzell gets easy putbacks and layups, and Mensah is catching alley-oops again.

The downside to this game is that Jordan Schakel shot at a clip of 2/5 from the field and got into foul trouble. The work is there, but the ball didn’t find the bottom of the net against the Toreros.

The Aztecs are playing throwback San Diego State ball with strong defenders and selfless ball. Having the game for Wetzell makes the Aztecs look loaded for a hopeful deep NCAA Tournament run. 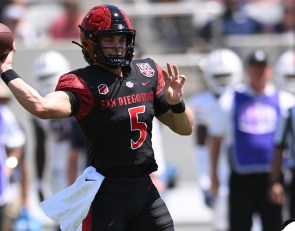 Is San Diego State In Trouble?