Fresno State doomed by poor shooting from outside

Fresno State fell to #14 Oregon on Tuesday night, 71-57, at Matthew Knight Arena in Eugene. The Ducks were led by standout point guard Payton Pritchard. The senior poured in 24 points to go along with seven assists.

The Bulldogs (0-1, 0-0 MW) kept it close with Oregon during the first half. With just two minutes to go before halftime, Fresno State trailed by just five points. But the Ducks subsequently went on a 16-2 run that stretched to the first media timeout of the second half, putting the game out of reach.

Justin Hutson’s team was not shy from launching the deep ball, taking 36 three-pointers throughout the game. Unfortunately for the Bulldogs, they converted on just 25 percent of those shots. FSU big men Nate Grimes and Aguir Agau were efficient, combining to shoot 5-for-9 from beyond the arc. But guard New Williams, thrust into a larger role with the departures of Deshon Taylor and Braxton Huggins, missed on all six of his three-point attempts.

Grimes led all Bulldogs scorers with 13 points. He was the only Fresno State player to score in double figures. Agau contributed eight points, four rebounds, and three blocks, but played just 15 minutes while picking up four fouls.

Noah Blackwell, who is expected to be one of Fresno State’s top contributors this year, did not travel with the team after being suspended for a violation of university policy, per Robert Kuwada. The guard will also reportedly miss the team’s next two games.

Looking in on the two former Mountain West players on the Ducks’ roster, Anthony Mathis scored nine points on 4-for-6 shooting, while Shakur Juiston tallied five points, six rebounds, and a block.

NEXT UP: Fresno State hosts Winthrop on Sunday at 2 P.M. The Eagles (0-0, 0-0 Big South) were not in action on Tuesday. Their first game of the season is scheduled for Thursday against Hartford. 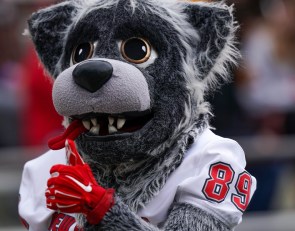