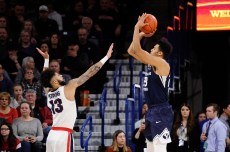 It seems like Pritchard has been commanding the Duck’s offense for a decade now. It’s probably because he has been an impactful player since his freshman season where he was a key part of Oregon’s Final Four run. Pritchard led a team last year that did seem to have some things go right at times and wrong at other times (Bol Bol’s foot). But Pritchard is back with former high school teammate Anthony Mathis to make another conference run and hopefully another NCAA tournament.

Jersey Number to Look For: 1

Bey is gifted with length and athleticism, and it showed last season, leading the Buffaloes in scoring and rebounding. He had an absolutely dominant performance against New Mexico in December last year with sixteen points, 11 rebounds, and tied a season-high five blocks against a “bigger” Lobo front court. Bey is only 6’7 218 but plays with confidence and bounce. We don’t get a New Mexico rematch this season but do get to see him against the Cowboys and Rams this season.

Jersey Number to look for: 35

Now Diane is impressive, the 6-7 Senegalase forward who will have to follow up on an amazing freshman career where he was named to the AP All-American honorable mention list and won the Big West Player, Freshman, and Newcomer of the year awards all in one season. Diane who joined Kevin Durant, Michael Beasley, Marvin Bagley, and Deandre Ayton as the only freshman to put up 20 points per game to go a long with 10 rebounds per game in the last 15 years.

Diane’s production can look effortless at times. When watching his inaugural college basketball game last season against the Lobos, he was able to score 34 points and grab 7 boards by making effortless slashing moves through the Lobo defense. He is the only player on the list to score double digits in every game last season and had seven 30+ point performances last season, the most of anyone on this list. I’m not sure where he can go from here but we get three chances to see him in the Mountain West this season starting with a rematch against New Mexico in the Pit in November.

Jordan Ford will be a problem for Gael opponents this season as he was last year. His points per game average has increased very well in each of his three seasons in Moraga. And he only failed to score in double figures twice last season while posting 35 points against Utah Valley last year and had a 28 point performance against New Mexico in the Basketball Hall of Fame Classic. Ford should be fun to watch for all college basketball fans and we around the Mountain West get three chances to see him listed below.

Jersey Number to Look For: 23

Childs is our number one guy for Mountain West fans to watch in non-conference play. He almost didn’t make the list at first thought when I remembered he had been given a nine-game suspension from the NCAA for withdrawing from NBA draft consideration after already signing with an agent and received impermissible benefits during that process.

The NCAA has changed the rules a bit over the last couple of seasons and athletes can sign with agents and still return to school without forfeiting any eligibility (assuming the right forms are submitted on time).

The expenses have since been repaid but the damage to Child’s season has been done. Nine games is a bit harsh and he made the list by luckily being eligible to return for some remaining games against Mountain West opponents this season. And with two of Child’s seventeen double-double performances coming against Nevada and UNLV last year, watch out for his scoring and rebounding this season as this Cougars team is chasing a conference championship.