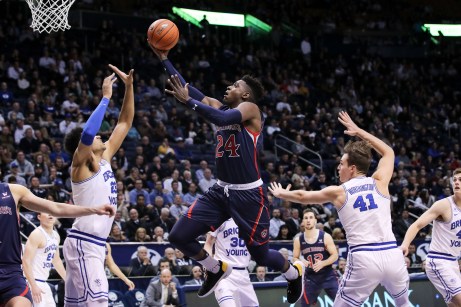 Jersey Number to Look For: 5

Toolson returns to Provo after having a pretty successful second half of his career in the WAC playing for Mark Pope at Utah Valley. Toolson followed Pope back to Provo for a triumphant return, and could be a great scoring addition to the team with leading scorer Yoeli Childs sitting out the first nine games with a suspension. It will be interesting to see the impact Toolson has for the Cougars after scoring 14 points against them last year as a Wolverine. He can also shoot the ball well leading the WAC making 44% of his threes leading to Player of the Year honors.

Gomez can outright score and plays well above his 5-8 stature. He might be the lowest ranked player on the list who had multiple thirty point games last season. Including a 21 point performance against New Mexico in the Matador’s home opener. He’s a bit too fast for most guards to defend and can get under guys who don’t have great ball security. Make sure to tune in and see how much Gomez can score this season as he will pair up with another dynamic scorer in our top ten.

Jersey Number to Look For: 30

Haws is looking to be the one-two punch this BYU team needs for head coach Mark Pope to help dethrone Gonzaga in his first season. The Cougars don’t lose much from last year’s squad, and with additions from Utah Valley (Toolson) and Gonzaga (Jesse Wade) entering the court alongside Haws, the ceiling should be very high in Provo. Haws can flat out score but he had his worst performance of the season last year against a Nevada team that does look a bit different this year. Haws is a part of a BYU team that we will see five times this year, so look at the dates below and figure out when you want to watch.

Jersey Number to Look For: 32

Now Mathis should be well known around the conference as a lights out shooter with the Lobos last season. Mathis was granted a fifth year of eligibility and decided to return to his home state and team up with a fellow top 25 list member Payton Pritchard as they did at West Linn High School some years ago. Mathis should provide some scoring relief for Pritchard as he attempts to make an impact for the Ducks and may even be asked to run the offense as he did last year in Albuquerque.

Jersey Number to Look For: 24

Fitts a California native who started his career at South Florida was a big part of the Gael’s success last season in his first season with Saint Mary’s. Though the Gaels struggled in non-conference play, Fitts provided a needed frontcourt presence after the graduation of Jock Landale. With a mid-range game and rebounding acumen to match, look for Fitts to jump in when teams try to double team fellow Gael Jordan Ford.