Should the Mountain West Move to a 20-Game Schedule?

Should the Mountain West Move to a 20-Game Schedule?

This format switch would also undoubtedly make waves in non-conference scheduling. While the Big Ten has seen its members’ SOS metrics rise, and the Pac-12 has enacted non-conference guidelines to boost their league’s profile, the Mountain West may have difficulty replicating these outcomes.

The Mountain West is looking seriously at going to 20 league games next year, in large part because nonconference scheduling has become so difficult. Three MWC teams were still looking for noncon games in late September, which officials say was unprecedented.

Many of the schools in the Mountain West may be “too good” for high-major programs to put on their non-conference schedules. Power 5 programs, especially those outside of the Top 25, don’t want to be embarrassed by a mid-major in front of a national audience.

Conversely, the MW may not have the panache (or the money) that lower-tiered schools are looking for when scheduling their own “buy games”. That may be one reason for the league to look inward to solve its scheduling problems.

Five teams in the Mountain West finished in the Top 150 of both the NCAA’s NET rankings and Ken Pomeroy’s advanced analytics ratings last season. The expanded league schedule could theoretically lead to more chances to grab quality wins against those clubs. Following this line of logic, more Mountain West teams could walk into March with tournament-caliber resumes.

But there is no guarantee that this would be the case.

For those keeping track, having five Top 150 squads in the MW last season means that the other six teams fell below that threshold. Wyoming and San Jose State were sub-300 teams, landing among the fifty worst teams in the country. In many cases, two extra league games in the Mountain West will actually lower a team’s overall strength of schedule — depending on how they structure their non-conference docket, of course.

Teams in the Mountain West have done a decent job this season of scheduling marquee non-conference games against solid programs in the western states. Matchups with Pac-12 schools and dangerous mid-majors from the WCC, Big West, and Big Sky can be found across the league. And starting next season, the A10-MW Challenge will begin, ensuring another solid game on the docket for most Mountain West schools.

But with the possibility of 20 league games on the horizon and the league locking in its A10-MW event, teams will soon face tough choices when drafting their non-conference schedules.

Will MW schools sacrifice the easy wins afforded them by scheduling a few cupcakes? Or will they opt into more “buy games” against top-flight Power 5 schools for a guaranteed paycheck and the glimmering hope of an upset?

Going too far in either direction could either tank a team’s SOS or it could add blemishes to their win-loss record. Straddling the line likely won’t yield significant gains toward either.

– A 20-game conference schedule is a real possibility next year

– TV deal will likely be with 2+ networks

Of course, there are other considerations to factor in when looking at the league’s decision to move to a bigger conference slate. Television deals are where conferences can really make their living. Adding extra league games into the schedule means more TV revenue for the conference. From a financial perspective, the move could be a boon for the MW — even if it comes at the expense of its members’ chances to make the NCAA Tournament.

For his part, MWC commissioner Craig Thompson said in an interview with Tyler Bischoff on ESPN Radio that the move to a 20-game schedule would “not necessarily” result in more NCAA Tournament bids for the league. He added, “I think UNLV would be much better served playing two more conference games than three or four of the people that are on their current schedule.” Thompson went on to suggest that MW teams should drop the worst opponents from their non-conference schedules to account for the extra league games.

So, while it is a nice mental exercise to weigh the pros and cons of moving to a 20-game conference schedule if Leon Rice is correct, then the horse is already out of the stable. Now, it’s up to the league’s coaches and administrators to adjust to this new reality.

Follow @MWCWire on Twitter for updates on this situation and other stories from the Mountain West’s Media Day. 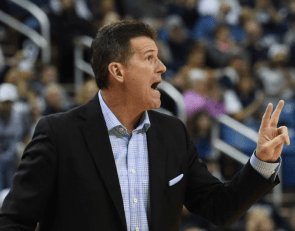 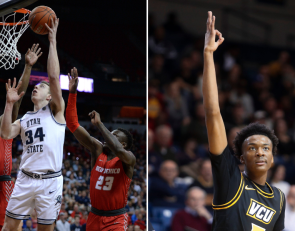 New Mexico vs. Utah State: How To Watch, Livestream, Preview, Odds Someone has to win this game. Contact/Follow (…)

New Mexico vs. Utah State: Keys For A Lobos Victory Lobos, Aggies each looking for first win. Contact/Follow @MWCwire Who (…) 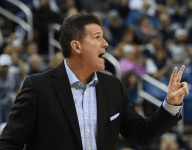 Nevada vs. Nebraska Game Preview: How To Watch, Odds, Prediction The Wolf Pack take on a Big Ten foe. Here’s how to watch and what (…)

BYU, San Diego State Could Move Game Up To This Weekend