What does the second half of the season have in store?

Cowboys are on track to return to bowl season

The Cowboys have gotten off to an unexpected 4-1 start to begin the 2019 season. With the Pokes hitting the bye about halfway through the season, we decided to circle the wagons, reflect on the first half, and attempt to look into the future.

We’ve reached out to a couple of other people you should know who cover Wyoming sports to help out with this piece.

Our first guest contributor is Cody Tucker, the founder of 7220 Sports. Cody and his team have taken their love of the Cowboys to the next level and have created one of the most comprehensive sites dedicated to one school that you’ll find. In addition to his daily posts from the Wyoming beat, he also has in-depth interviews with current and former Cowboy greats as well as many other cool things here and there.

Our second guest contributor is Connor Cunningham from WyoNation.com.  Connor has a weekly wrapup and hosts his 5 on 5 roundtable where people around the Wyoming scene give their thoughts on the previous week and the week ahead.

What are your thoughts on where the Cowboys are at this point in the season?

Cody: I picked them to win anywhere between four and seven games. We just didn’t know a lot about this young squad heading into the 2019 campaign. I have been seriously impressed with both lines early on. These spots were maybe thought of as liabilities during the preseason, but, boy, have they played a major role in getting Wyoming to 4-1. I don’t think we have even seen this team click 100% yet, which is scary for the rest of the MWC. I think they still need to figure out how to make the passing game more effective and stop big plays on defense. However, who wouldn’t take 4-1 right now? Not to mention they are just a few yards away from perfection.

Connor: I think their record is what I hoped it would be at this point, it is a bit disappointing that they didn’t beat Tulsa, but they are so young, a let down on the road seemed inevitable. It is crazy to think that they are only 3 yards from a 5-0 start. Their schedule is a lot tougher coming up and the MWC is off to a nice start, so hopefully, they can get healthy for a nice run.

Ryan: I wish I felt the same excitement that I see from the fans. I think it’s great that the Cowboys have been able to ride an upset like the Mizzou game – which keeps looking better – to a 3-1 record, but the progress hasn’t been what I would think would be needed to sustain a run in the Mountain West. I think the big plays by the defensive secondary made you overlook how porous their coverage (second to last in passing yards allowed in the conference) has been and the brilliant running game, including that of Sean Chambers, has let you skip over the predictable pretty-much no-passing offense.

Jesse: This is always tricky because it’s so easy to focus on what they have struggled with rather than to acknowledge how they are so much further along than many projected. The reality is that the Pokes have had a tremendous start to the season and they have laid a foundation to have success this season but to potentially make a deeper run in the next 2-3 seasons.

There has been a lot of production from Wyoming’s freshman class, which freshman or two do you see making the biggest impact down the stretch?

Cody: On defense, I have to go with Solomon Byrd. He is just getting better and better each week. He is so disruptive and quick at the point of attack. Definitely not playing like a freshman right now. The easy answer on offense is Sean Chambers, but I am going with young Titus Swen. We got a glimpse of what he is capable of in the blowout win over UNLV, where he dodged, weaved and hammered his way to a career-best 136-yard night. If Wyoming is going to run the ball 45-plus times a game, they better hope he’s a bell cow. He is already starting to remind fans of a guy named Brian Hill who had a pretty solid career in Laramie.

Connor: It is crazy how many freshmen are impacting games right now, the new redshirt rule has been a great thing for Wyoming. The obvious choice is Sean Chambers. It doesn’t seem like he is a freshman, but he benefited as much as anyone from the new rule. The offense can only go as far as he is going to take him. The other guy on offense to watch is Titus Swen, he looks like the real deal.

On defense, I am quickly falling in love with the way Solomon Byrd plays. I think this guy is an absolute monster and has a chance to play a huge roll down the stretch. Honorable Mention: Rome Weber

Ryan: Take your pick? With five starters being freshmen last week in the fluid lineup of this squad, it’s been impressive to see how all of them have stepped into some big-time situations. I’m a big Solomon Byrd fan just because he has burst on the scene the last three games to now lead the team in sacks and because he’s from my hometown area in California. I think he will continue to produce if he stays healthy. Offensively, the easy choice is Chambers, but I’m going to go with Titus Swen out of the backfield. Out of the three backs, and this isn’t to knock on any of them, he’s been the one to stand out the most to me. And with Trey Smith out for a long time, I think Swen is an excellent complement to Xazavian Valladay. He’s got the vision to bust big plays out of nothing and the build of a player that doesn’t look like he’s just out of high school.

Jesse: There are so many players to choose from here, Chambers, Titus Swen, Solomon Byrd, Rome Weber…I’ll take Titus Swen. Remember Brian Hill? It’s incredible what an elite back can do with a talented offensive line. Swen has a way to go before he reaches that level but the duo he forms with Valladay is exciting.

Ok I’ll take Solomon Byrd too! As the competition gets better, it will be interesting to see how he does. He seems to live in the opponent’s backfield. He is getting better each week and I’m excited to see how he performs against some of the conference’s best in the second half.

Cowboys force the first turnover of the game. 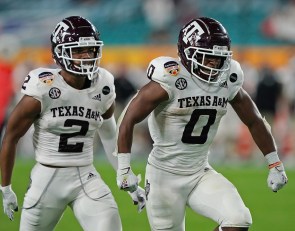 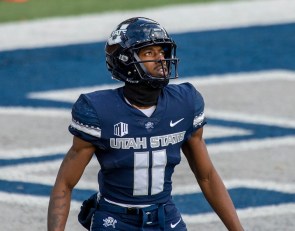 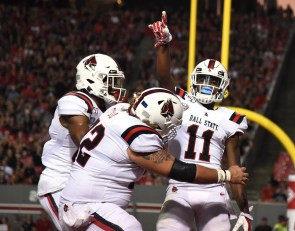 New Mexico Football: First Look at the Texas A&M Aggies The Lobos will hit the road to face Texas A&M in non-conference play. (…)

San Jose State Football: First Look at the Western Michigan Broncos The Spartans will head to the land of MACtion to square off with (…)