The Rainbow Warriors come into Nevada and dismantle the Wolfpack

Hawaii came back to the mainland for only the second time this season on Saturday, opening up Mountain West play. They took the long trip to Reno, as a date with the Nevada Wolfpack was on the docket.

Keeping up with how he’s played all season, Cole McDonald went 25/30 for 312 yards and four touchdowns. McDonald didn’t even play the entire game, as they pulled him out once the score was more than handled by the Warriors.
Cedric Byrd was reeling them in all night, as he had seven receptions for 87 yards and a trio of touchdowns. Jason-Matthew Sharth was the leader in receptions for the Warriors, catching nine passes for 123 yards and a touchdown.

H I G H L I G H T S@HawaiiFootball gets their first win in Reno since 2007 pic.twitter.com/OCGifrd11g

Hawai’i dominated from the beginning, going up 28-0 before Nevada scored their first points of the game. Nevada came into the game as favorites but definitely didn’t look like the favorite once the game started.

The Hawai’i defense played very well, keeping Nevada out of the end zone and forcing three turnovers and a safety during the ballgame. Everything really went right for Hawai’i on Saturday as they throttled Nevada, scoring a season-high 54 points. Kicking was good, as Ryan Meskell made all eight of his kicks, with his one field goal being from 44 yards. Meskell has made all 24 of his extra-point attempts so far this season, tallying 33 points in total during the first five games.

The Warriors go on a bye week before their toughest conference test of the year. Hawai’i will make the trip out to Boise and play the nationally-ranked Broncos. A win there could be a defining moment in an already quality season. The 54-3 win pushes Hawai’i to 4-1, their only loss being to Washington. 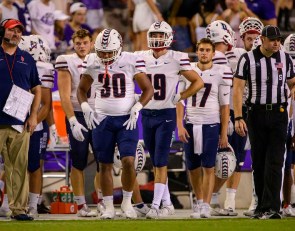