The Fresno State cornerback is the second Bulldogs defender to make our annual list of Mountain West football’s best players.

One of the conferences’s best DBs is back on the list.

Fresno State cornerback Jaron Bryant is next on our list of Mountain West football’s 52 best players this season, coming in at #41 after putting together another strong season in an elite defensive backfield.

In his junior season, Bryant had 12 passes defended, two tackles for loss, and an interception. He also owned the highest Success Rate among the four key players in last year’s Bulldogs secondaey metric.

Heading into his last season at Fresno State, Bryant is already starting to get some helium as a potential selection in next year’s NFL Draft. As it is, he’s already on the shortlist of the best players at his position in the conference. 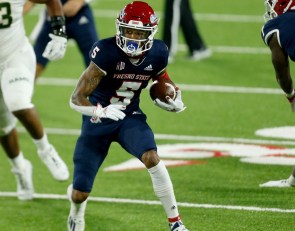 Tokyo 2020 Olympics: Team USA is one win away from gold medal

Haaziq Daniels or the Field? How much better could the passing game be in 2021? Contact/Follow @Sean or @MWCWire (…)

2021 Mountain West Football Top 50 Players: #27, Hawaii QB Chevan Cordeiro The Warriors quarterback did it all in a brand-new (…)

2021 Mountain West Football Top 50 Players: #29, Boise State OT John Ojukwu The Broncos left tackle is back once again on our (…)

New Mexico Football: First Look at the Texas A&M Aggies The Lobos will hit the road to face Texas A&M in non-conference play. (…)