The Lobos hope to get back on track against the dangerous Utah State Aggies. Here’s our preview of how UNM can pull the upset.

STREAM: The game will be streamed on Facebook. Check back here at Mountain West Wire on Saturday for a direct link.

RADIO: The New Mexico broadcast can be found in and around Albuquerque on KKOB, 770 AM, and elsewhere throughout the state on the Lobos Radio Network, so check local listings.

The New Mexico Lobos won’t have much time to linger on last week’s blowout loss against Fresno State as they continue through their toughest stretch of 2018, hitting the road to square off with the Utah State Aggies.

Utah State had made a habit of demolishing inferior competition, but they found themselves in a defensive fight last week against Wyoming. The Aggies remain out in front of the Mountain division, and they’ll be sure to have an energized home crowd with a potential spot in the first College Football Playoff rankings at stake.

Here’s what New Mexico can do to right itself and stun Utah State.

Get at least a little better on Passing Downs.

One thing that has limited New Mexico’s offense in the past two weeks is that Sheriron Jones has struggled to extend drives in more obvious passing situations. Per Bill Connelly, Passing Downs are defined as 2nd-and-8 or more, 3rd-and-5 or more, or 4th-and-5 or more; Jones was just 6-of-15 for 42 yards with two sacks against Colorado State and Fresno State on those downs.

Against a Utah State defense that has allowed just 18 first downs on 60 third-down pass attempts (30%), this figures to be an uphill battle that UNM must win to have a serious chance.

New Mexico has struggled mightily in the last month to contain opponents’ number one receivers: Antonio Gandy-Golden, Preston Williams and KeeSean Johnson all had big games against the Lobos. While Utah State has done a good job of distributing targets even without tight end Dax Raymond, it seems like the next obvious candidate to threaten 100 yards is Tarver, who was held in check by Wyoming last week (one catch on five targets).

Utah State was able to escape Laramie with a win thanks in part to special teams play. Savon Scarver’s 99-yard kick return score was his second of the year, but he may have a much tougher time against a Lobos unit that has very quietly been pretty good on all such fronts.

New Mexico currently ranks second in Special Teams S&P+, which means punter Tyson Dyer, whose punts have netted 39.2 yards on average, and kickoff specialist Danny Sutton, who sports a 66.7% touchback rate and whose kickoffs have averaged only 13 yards per return, might be the unsung heroes needed to stay in the game.

Week 9 Mountain West Player Of The Week Of The Year 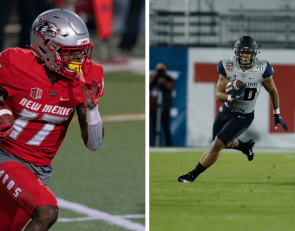 UNLV vs. Wyoming: Preview, How To Watch, Livestream, Odds Rebels are looking for first win of the year Contact/Follow (…)

New Mexico vs. Utah State: How To Watch, Livestream, Preview, Odds Someone has to win this game. Contact/Follow (…)