Klay Stall, Dwayne Brown, and Roche Grootfam are all sidelined with injuries as practice is underway

Despite the head coaching change, the injury bug has touched down in Logan for the second consecutive year.

Cache Valley Daily’s Eric Frandsen reported Monday that the Aggies will be without three key pieces when it tips off its season opener in November.

Dwayne Brown Jr., who started 33 times and averaged 9.0 points per game last season, broke his hand and will be out approximately a month.

Klay Stall, a role player on last year’s Aggie squad, tore his ACL and will miss the remainder of the season.

Roche Grootfaam, a JUCO transfer by the way of Southern Idaho, will also be out the entire year due to complications with a previous knee injury that have resurfaced.

The injury news handicaps Utah State much like it did for the majority of the ’17-18 season. Brock Miller played only five games due to a foot injury, Julion Pearre missed half the year with various ailments, and Norbert Janicek had to sit out and the entire year with a foot injury, which eventually led to his retirement.

The late offseason addition of Neemias Queta looms large for the Aggies with the newly depleted frontcourt. Queta averaged a double-double with the Portuguese U-18 and U-20 teams and stands at 6’11”. 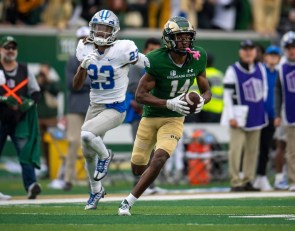