Illinois State Vs. Colorado State: Get To Know The Redbirds

Illinois State Vs. Colorado State: Get To Know The Redbirds

Illinois State vs. Colorado State: Get to Know the Redbirds

Colorado State hosts FCS Illinois State on Saturday, so we talked with Randy Reinhardt of The Pantagraph to preview Redbirds football.

Colorado State looks to rebound against the Redbirds.

It’s been a rough September for the Colorado State Rams, but their non-conference schedule comes to a close against the Illinois State Redbirds on Saturday. On the surface, it might seem like the Rams should beat up on an inferior opponent, but there’s a chance it may not be that simple.

ISU fell off to 6-5 in 2017, but they won their FCS opener convincingly against Eastern Illinois last weekend and it wasn’t that long ago (2016, to be exact) that the Redbirds went on the road to topple someone in the FBS ranks.

To get a better sense of what to expect from the Redbirds, we reached out to Randy Reinhardt of The Pantagraph, who took some time answer our questions about Illinois State.

Matthew Kenerly: One thing I noticed in looking over the Redbirds two-deep is that there are a lot of young players on both sides of the ball. Among the freshmen and sophomores in the starting lineup, who has stood out to you in the young season so far?

Randy Reinhardt: Andrew Edgar has had some nice moments at wide receiver. John Ridgeway is a huge nose guard at 6-6, 325 as a redshirt freshman. He is still learning, but has immense physical skills. Backup middle linebacker Zeke Vandenburgh is another up-and-comer who covers a lot of ground.

MK: It seems like Spencer Schnell is the name to watch among ISU’s receivers, so what kind of a role does he play in the Redbirds passing game?

RR: The Redbirds move Schnell around a lot. He’s very effective from the slot catching balls over the middle in traffic. But they do line him up wide and send him deep on occasion as witnessed by a 97-yard touchdown against Eastern Illinois.

MK: Colorado State’s front seven has struggled to be consistently disruptive in the first few weeks, which makes me think that quarterback Brady Davis and running back James Robinson could give the Rams some trouble. What strengths will those two bring with them to Fort Collins?

RR: Davis has shown the ability to pass on the run accurately. But the first two defenses ISU has faced have been bad, so it’s hard to judge the offense as a whole. Robinson is a tough runner who can break tackles and has pretty decent acceleration.

Hawaii Adds Robert Morris To Its Schedule For 2020 Season

MK: A significant volume of the Rams’ passing game flows through Preston Williams and Olabisi Johnson, which means that the cornerback tandem of Willie Edwards and Devin Taylor will have their work cut out for them. How do you think they’ll match up with CSU’s dynamic wide receiver duo?

RR: That will be a huge challenge for the Redbirds. ISU has good length in the secondary but I’m not sure they’re up to keeping up with those receivers.

MK: Finally, how do you think this game will play out, and do you have a prediction?

RR: My only prediction is a Colorado State victory. 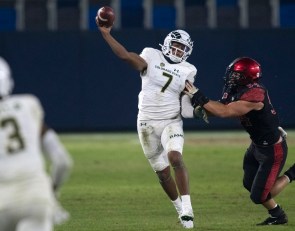 Fresno State vs Boise State Preview The week of makeup games is here Contact/Follow @MWCwire Who: (…)

After sweeping Boise State, SDSU is sitting pretty atop the MW Can the Aztecs wrap up a MW title in the final week of the regular season? (…)

Aztecs Complete Sweep of Boise in Close One.