Aztecs will have a new starting quarterback this week.

San Diego State is going to be missing starting quarterback Christian Chapman for as much as six weeks. Chapman was injured in the closer than expected win over Sacramento State on Saturday, but now we have the details of how long he will be sidelined.

Latest on @SDSUFootball QB Christian Chapman is he will be sidelined 3-6 weeks with sprain of MCL in left knee. Slight tearing but will not require surgery.

This means that backup quarterback Ryan Agnew will get the start while Chapman is out. Agnew came in during the Sacramento State game and completed 11 of 17 passes for 159 yards but also had a pair of interceptions. However, he did have three rushes for 21 yards.

While Chapman is not a quarterback that will regularly throw for over 300 yards on 22 of 30 passes, and part of that is due to the offense where the Aztecs want to run the ball all day, but Chapman does not turn the ball over and when called upon for key drives and throws he gets the job done.

Agnew will be making his first career start, luckily at home, but it is against an Arizona State team which just upset Michigan State, is 2-0 and ranked in both polls. 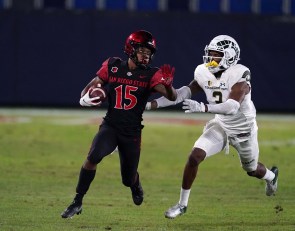