The former Wolf Pack star is the face of Nike’s new campaign.

Former Nevada quarterback Colin Kaepernick has been in the news for quite some time as he was one of the first players in the NFL to start to kneel for the national anthem. He has yet to get a job in the NFL and is currently suing the league.

News came out that Kaepernick is going to be the face of Nike’s 30th edition of its Just Do It campaign. There are plenty of people who love this idea and plenty who hate the idea and some of the latter are destroying their Nike gear with this campaign. (side note: if you dislike this move, don’t trash your stuff but go out and donate that stuff if you wish to no longer support Nike because of this).

The ad is going to air on Thursday night’s opener for the NFL season which is awkward on two fronts. First, Kaepernick and the NFL are in a legal tussle and Nike is the official outfitter of the NFL.

Here is the extended ad which is voiced by Kaepernick himself. 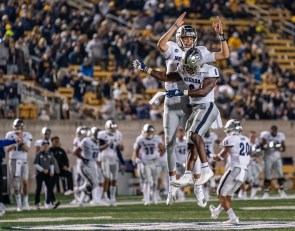