But will it happen any time soon?

Of course, an 8-team playoff is more fair.

Media days for college football are occurring over the country and usually, there is a lot of non-sense and non-news spouted off by coaches and players. Perhaps this is in that same category but Oklahoma State head coach Mike Gundy once again is advocating an eight-team playoff to include an auto bid for the non-power conferences.

Mike Gundy said he prefers an 8-team @CFBPlayoff (Power 5 conference champs, 2 wildcards & G5 team): “If you’re at a smaller (Group of 5) school you essentially have no chance to win a national championship because you’ll never get in & I don’t think that’s fair.”

Yes, the system is unfair and any person associated with college football would say as much since the P5 leagues are given preferential treatment over G5 leagues, and usually deservedly. However, a team from a league like the Mountain West would need years of great runs to be considered for a playoff bid and have a few big-time upsets during that span.

Look at San Diego State, the Aztecs have won 32 games in three years, an elite defense and arguably one of the best rushing attack over the past few years in all of FBS. Yet, San Diego State has hardly been talked about as a great team even when they are rolling through the Mountain West. Yes, strength of schedule comes into play but wins are wins and there are teams in the G5 that can play with anyone and history shows that on the big stage.

“I will go ahead and answer the question that I know is on some of your minds: There is no talk about expansion among the university presidents and the conference commissioners who sit on our boards,” Hancock said.

“The CFP works. It works well. Four teams keeps the focus on this wonderful regular season, the most meaningful and compelling in all of sports,” he said. “Four lets us keep the bowl experience for thousands of student-athletes. Four keeps college football within the framework of higher education.”

Sancity of the regular season and all that bla, bla, bla. We have heard this before when the BCS was around but all of a sudden a ton of money was presented for a four-team playoff and poof, we have the College Football Playoff.

This will change in the near future and the next step is likely what has been thrown out there with an eight-team playoff that has all league champions from the Power Five, one Group of Five champion gets in, plus two at-large.

That seems simple emough and it still places a huge emphasis on winning a conference champion. 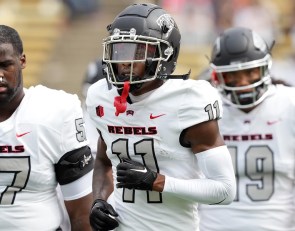